Sex icon Anna Nicole Smith has begun the inheritance battle in the Supreme Court. Smith is fighting Pierce Marshall, the 67-year-old son of her late husband, billionaire, J Howard Marshall, for half his estate. If successful, she stands to inherit $88.5 million or more. 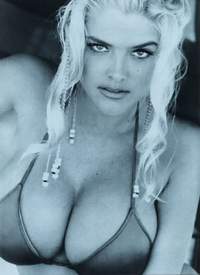 Millions know her as the star of her own eponymous reality show on the E! cable channel, as a columnist for the National Enquirer and as a pitchwoman for TrimSpa diet pills.

But her persona yesterday was that of the Widow Marshall, aggrieved spouse of the late Texas oil plutocrat J. Howard Marshall II - whom she wed in 1994, when she was 26 and he was 89. He died the following year. According to Anna Nicole, J. Howard intended to give her tens of millions of dollars from his estate, but his plan was fraudulently thwarted by his son, Pierce, who wanted the old man's money for himself. She has been fighting Pierce ever since.

For his part, Pierce, 67, says that he did nothing wrong and that his stepmother is a frustrated gold digger who lost her case in a Texas court - and is now shopping for a favorable new forum in the federal courts as if she were at Neiman Marcus.

For the Supreme Court, the nub of the problem is that different courts have come down on opposite sides of the case. A federal bankruptcy judge and federal district judge in California both ruled for Anna Nicole, with the latter awarding her $88 million in 2002. But a Texas probate court had ruled in favor of Pierce in 2001.

The San Francisco-based federal appeals court ruled last year that the Texas court's decision should trump because matters having to do with wills and estates, or probate, as the lawyers call it, belong exclusively in the state courts. Anna Nicole's claims are just a dressed-up attempt to refight a settled will contest, the appeals court ruled.

Pierce has been supported in the suit by the National College of Probate Judges and the Philanthropy Roundtable, who worry about the implications of her arguments for their own interests.

But Anna Nicole has a powerful backer of her own, President Bush. The United States often must file probate-related claims in federal court, to collect taxes and such, a brief signed by Bush's solicitor general, Paul D. Clement, notes. The U.S. Trustee Program thinks a broad "probate exception" to federal court jurisdiction would gum up the bankruptcy system, Washington Post reports.

J. Howard Marshall II was a successful lawyer who had gone on to make a fortune in the Texas oil business. By 1991, though, he was a tired 86-year-old man, despondent over the death of his second wife and a longtime mistress. His chauffeur took him to Gigi's, a Houston strip club, to lift his spirits. Vickie Lynn Smith dancedforhimthere, and he fell immediately in love. He began showering her with expensive gifts and demanding that she marry him. Financed by J. Howard, Vickie Lynn Smith became Anna Nicole Smith, posed for Playboy, went on tour as a spokesmodel for Guess? Jeans and generally "achieved the level of international sex symbol," as federal Judge David O. Carter put it in his 2002 opinion on the case.

Anna Nicole Smith (Vickie Lynn Hogan)was brought into this world in a small Texas town called Mexia in 1967. When she was growing up her father abondend her and she was shipped between her aunt and her mother. When Anna was 17 years old she met a man by the name Billy Smith (16) who she married and in the same year they had a baby boy named Daniel (1984). Anna Nicole Smith got started in the big time with her GUESS ad campaign in 1992. Anna being from Texas was a godess from the start, netglimse.com says.

According to fool.com there are several suggestions on how Anna Nicole Smith might invest her inheritance if she is successful.

1. Playboy
From a buy-what-you know point-of-view, this one's a no-brainer. In fact, Ms. Smith may already have some Playboy in her portfolio.

Is Playboy a great stock? With her intimate knowledge of the company, Ms. Smith is a far better to judge With analyst expectations of 15% earnings growth per annum over the next five years, and 20%-25% growth in 2006 alone, Playboy's stock could grow quick like a bunny.

2. Rio Tinto
Harmony Gold Mining. A name like that just cries out for a spot in Ms. Smith's portfolio. But this company's financials show that investing in an unprofitable, free cash flow-negative, sixth-largest operator of gold mines probably wouldn't make for the most prudent use of Ms. Smith's capital. Ms. Smith surely knows how difficult gold-digging can be, and that the more diversified enterprise Rio Tinto offers a better valuation proposition. Rio doesn't confine itself to gold, but also digs up copper, diamonds, and iron ore, among other minerals. Its lack of a gold fixation has helped to divert gold bugs from its shares, which currently trade at an ultra-low seven times trailing free cash flow and a price-to-earnings ratio of 12. With the company projected to grow its profits at 11.5% per annum in the long term, this one's a keeper.

3. Mentor or Inamed.
Both companies produce breast implants. Perhaps, given her knowledge of the industry Ms. Smith knows some reason why Inamed is the better company of the two.

4. Sunrise Senior Living.
This may be a bit downmarket for her tastes. Besides, the company is free cash flow-negative and sports a P/E more than twice as high as its growth rate.