The Kathopnishad: A Commentary (Part II)

The Kathopnishad: A Commentary (Part II) 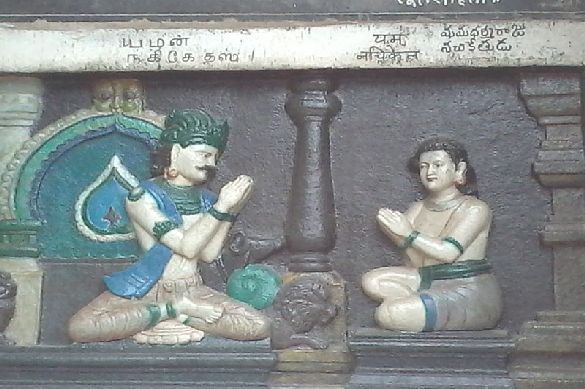 "Fools pursue desires outside themselves,
Fall into the snares of widespread death:
But wise men, discerning immortality,
Seek not the stable here among unstable things."

Nachiketa's Third question to the grand teacher of Life called Death is: "What happens after death!?"

Death replies: "O Nachiketa! The greatest of the wisest have desired to know about this. This is not an easy topic to speak about. Ask for another boon!"

Nachiketa said, "There is not a better person than Death to talk about death and the afterlife. I, surely, cannot be asking for anything else!"

Death, on his part, lures him with wealth and worldly happiness, but the wise Nachiketa rejects everything by saying, "These are all temporary....they exist today and are gone tomorrow. The human mind cannot get peace in wealth. One, who knows Death, knows the truth of life. I still wish to know what happens after death!?"

Thereafter, Death tells him that a truly wise person is able to differentiate between truth and untruth. He being, full of patience and wisdom, understands that the worldly things are only as long as the world stays with us. Therefore, such a person sees no benefit in being attached to desires. What the world knows to be knowledge is sheer foolery and what the world calls foolishness is the real wealth of knowledge.

Coveting of wealth and worldly pleasures, a man, though an adult, is no better than a kid. Such a mind will never be able to understand the benefits of non violence, truth, penance, satisfaction, celibacy, hygiene, because these things do not match with his purely material desires. This attachment, in due course of time becomes responsible for the continuous birth and death of the soul in question.

Meditation upon the ultimate source of everything, in the Universe is not an easy task...simply because, that power is beyond the senses and beyond any logic. The seeker after such a quest must be pure in heart and stable of mind.

One of the ultimate truths in life is the fact that al these material pleasures are transient. How can instability, then, lead one to the Stable!? One who has given up ambition, desire for worldly respect all ritualism, and has crossed the farthest boundaries of fear to dwell in what is the ultimate truth, is the one who gets to know it in the end; even though, "that" is the oldest, and is complex beyond complexity...yet spirituality is the way to "that". Leaving pain  and pleasure behind, the one who stays stable, with the passage of time, is the one, who gets" there".  Death told Nachiketa, that, "That" is the goal of all the duties... and "That" is the source of the ultimate bliss, in this life and the afterlife.

Thus, Death spoke , and said to Nachiketa, " I think,  have shown you the way...now your path is hurdle free!" Nachiketa, further questioned, "O Death! What is that, which is beyond all Duty, all Action, all Time and is different from anything that belongs to this World!?"

Death answered, " O Nachiketa!, that is OM! OM is the seed word of Creation. It is the sound, whose resonance fulfills al the desires..,.it is the first and the last support of the human soul....it is the Brahma...the Ultimate!"

Further, Death tells Nachiketa, that the soul is never born and never dies. It is eternal. Only the body faces death, never the soul! If the killer, thinks that he kills , and the one who is killed , thinks himself killed, both are wrong. The soul is atomic, even smaller than that....one cannot expect the larger to fit in the smaller, though the reverse can happen...but here the truth is that despite being atomic, the soul is greater than the greatest. It is hidden in the heart cave; never to be beheld by the one who is caught up in the mesh of worldly interests. Only a selfless seeker, detached and pure, shall be able to see himself or the soul and all this happens when "that" wants it to happen!

"Sitting here, it reaches somewhere else and all joyful, yet detached from joy; eternal yet occupying the objects of transience, that soul is not mourned by those who know its true nature. Understand, O Nachiketa! That no logic can make you understand the true nature of the soul, till the Soul, itself, wants to be understood....and then, this understanding, is child's play!"

Nachiketa asks, "Where is it to be found?"

...and destructive power is called death. Know this, that the One you seek, has a power, which is above and beyond all, the three powers that I have mentioned. The Supreme can finish all the three just as a hungry man finishes his meal...and so, to know about such an immensely powerful entity and its whereabouts, to me, O Nachiketa, is a useless question!"

US-Russia standoff will end when USA wakes up Lyuba Lulko
Former USSR
Is Russia going to declare war on Turkey?
Americas
Covid-19 is an American game