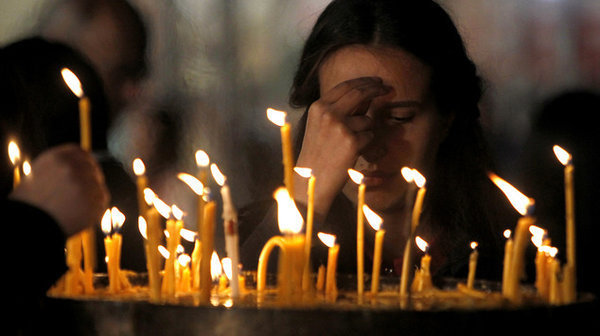 Today is Easter Sunday in Russia. We take a look at how this day is celebrated in the Christian Russian Orthodox tradition and examine how it is calculated. Today is a day of the celebration of the Rising of Christ (the Resurrection) but also a day of charity, giving to the poor, the needy and the orphanages.

Easter (To Eleonora) By Tatiana Pahlen

Every time around Easter,

When eggs are colored with motley shades,

Memories go to my dazzling sister

Years back to the adolescent, joyful days.

The smell of pastry in the oven

Mixed with fumes of roasted lamb . . .

she challenged my paltry cooking attempt.

I miss her whispers before bedtime -

two heads together -- ear to ear;

we chased from the closets hiding phantoms,

Now in church, prior to Easter Sunday,

Hearing the bells at the midnight stand,

in heart, I'm still with my esteemed sister,

Praying with her in a foreign land.