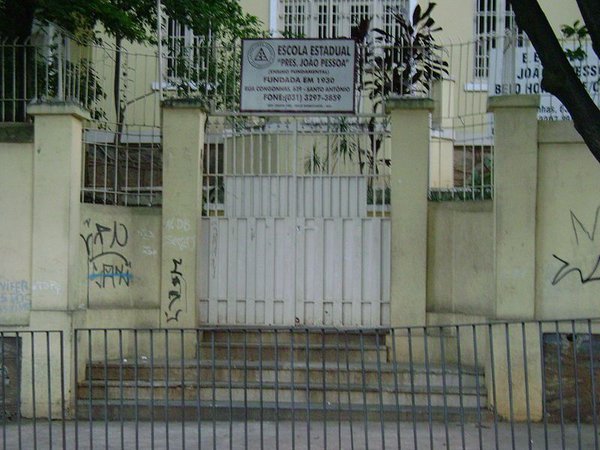 There has been in Brazil a conservative political movement (which falsely claims itself non-partisan) called School without a Party (Escola sem Partido), which has been passed in several states limiting teachers to only transmit the respective contents of their didactic materials.

As many School without a Party (SwP) followers do not publicly assume it, some leaders have spoken out the essence of this new "project": "Teachers' role is not forming citizens; they are expected to only say what their didactic book dictates". But teachers, much more than teach the respective subjects, are expected to develop critical sense and creativity in their pupils.

So teachers, especially leftists who generally base the work in raising awareness among students, have been prohibited from giving their opinions in the classroom. The punishment proposed by SwP is a criminal process against teachers who dare to give any opinion to their students, or even go a little beyond their respective books.

Students patrol teachers, and parents and directors sue them in a court if denounced by any student: a gag law in Brazil, a retrocession to the worst years of the military dictatorship.

On the other hand, Brazil has been for many years involved in a deep hate from every segment of the Brazilian society (starting by the mainstream and "alternative" media) which - recently more open, due to the national political and financial crisis - divide our society; the SwP "debate, by both sides, those in favor of it and contrary to the "Project", the current chapter of the deep hate among Brazilians, is amazingly polarized.

There have been countless declarations and acts of aggression in the name of freedom in Brazil. It has become a terrible (not surprising to many) fashion a revanchist rhetoric in the South American country, of course, followed by violent acts in the local society validating for oneself, what condemns in others - in the name of "freedom" and "social justice" (actually, an old Brazilian Way of Life).

Before all this, many teachers, in their role of raising awareness among students, have been so intolerant and much more political "sellers" than teachers in the meaning of the word (overwhelmingly, in defense of the Workers' Party, in few cases really promoting discussion among students as teachers are supposed to do). So School without a Party cannot be discussed, without being taken into Brazil's larger context.

Is the LESS BAD the Best in Brazil (as always)?

The Brazilian Constitution itself does not limit to the parents the education of their children: it categorically says that the State shares this function with the family. Besides, it sounds like a joke that the teacher does not have the role of forming citizens and that he is not free to express opinions in the classroom.

The United States is the Brazilian far right consume dream: guns, wars, capitalism, Walt Disney. Not in this case, related to School without a Party. Talking to former CIA agent John Kiriakou about such a "project", he has said: "It's crazy that in the 21st century we're still having these debates." The "debate" whether a teacher has or not the right of giving any opinion in the classroom, only fits in a Brazilian right-wing head.

What happens in Brazil is an aggressive, so hysterical advance of reactionary sectors; a military coup has been imminent in the Latin American country with a strong (and another hypocritical) moralistic appeal - a large part of SwP champions, advocates that the Brazilian military is the only honest institution in the country, which is not true at all as during the militarization of Brazil (1964-1985), the Army was emerged in cases of corruption as well as nowadays.

The single fact that some advocate today for another military coup demonstrates that the 21 years of military dictatorship have not benefited the nation - repression is never the solution. Actually, it is part of a US imperialism desperately trying to force all the region to the far right.

At the same time, related to SwP and its roots there have been too much excesses in many ways from every side, which is undeniable: in the classrooms (what should be fixed among school coordinators and teachers, never through criminal processes), and in the (often irrational) defense of the teaching profession, as opposed to the Project in question that vulgarizes the activity and the role of the teacher in the face of society.

Not to mention the current "debate" about SwP itself, too fierce - the Brazilian cultural level mirror, and a self-evident sign that many things are to be done in the national educational system - not at stake at all, never discussed due to the very hate and the old political interests that lock the local society.

What freedom of expression and more, what kind of education and citizen awareness does this type of "teachers" advocate/can provide by violating fundamental human rights, expelling, kicking and calling names other teachers and parents of students from a "debate" about the SwP project, for ideological differences? This is a Brazilian dilemma, that keeps the country in a perpetual quagmire.

The same way, there have been ridiculous "classes" in which "teachers" try to stick in the throat of their students the Workers' party and even socialism. These practices, which end up providing subsidies to the reactionary Project, the reason why SwP was born, ends up leading opponents of this situation to another extreme. But cannot be solved in a criminal court as has been said.

It is seen in the video a lawyer, one of the leaders of the "debate" claiming for the expulsion in the name of freedom of speech; another lawyer says to a father of student, "I am a Lawyer, know my rights", so go out from the place, no debate for you!

Brazilians have also to debate the very form of the "debate", what could make it possible to unravel what lies behind many interests, the essence of both sides.

This is the time to think about the education system in Brazil and the training of the Brazilian teachers themselves. Freedom of expression being used inequitably, even giving opinions in the classroom. Something seems very wrong, as fair solutions have not been discussed as in all issues the country sees a dead-end "debate", obfuscated by ignorance, hate and political interests.

The savagery in the "defense" of "freedom" and "democracy" shown in the video above is not an exception among Brazilians, not only in opposition to the School Without a Party project, but in everything that involves the Brazilian society: Brazil has seen the wave of statements by professors, political leaders and other important actors in society, that national conservatism will only be resolved at the tip of the knife (a universitarian Professor and columnist), with a good shovel and a good grave to conservatives, "a machine-gun against most Brazilians" (Workers' Party founder), "even if they are good people" (a leftist leader) not sharing what they call socialism.

Here we have a discussion about what is the best, and what should be in a utopian nation. Liberty to teachers to opine, to promote discussions in the classroom are good and necessary, a fundamental job to teachers - the same way respect for differences and physical integrity are.

But it seems that in the Brazilian case, again we have to choose the least worse: if this kind of teachers could just transmit what the didactic books say, it would be good enough!

No debating the education system, a change in teachers positions and a debate about the Brazilian "debate" itself, any debate is hypocritical in the country. The only way the Brazilian "left" could win the "debate" in such circumstances, would be by force - it seems this sector has realized that very well.