March 8: Not changing what must be changed 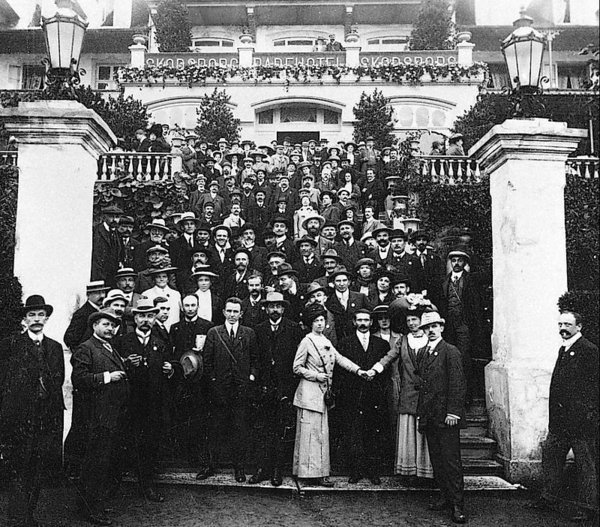 After attending the meeting called by "El Salto", to report on the conclusions of the feminist strike called for March 8, after a year of work by these working groups, I can say that the feminists are against the conclusions made by this commission, and, as a consequence, they will not find even one of my mothers, grandmothers, companions and comrades on their side.

The collapse came when, after listening with great attention to the messy decaffeinated stories translated by the four speakers, I found the answer that allowed me to understand what they had come to convey to the audience, the background of the act; a statement that ended up removing me from the bewilderment, from the disorientation I had until then: the strike was no longer an appeal to feminists, but only to women.

An exclusive appeal to women seems to respond to a logic of "grouping" without any content, a sum without resistances, a proposal that guarantees the most probable exit, manageable, prefixed, useful results, in order to optimize control over the subjectivities of all the participants. This is typical of a strategy linked to an electoral outcome, which aims to reach an upper limit [in the results] under a positioning or pronouncement according to the parliamentary market systems: mobilize to mean something from identity and difference, but not under the historical materialist conflict that has become the current state of affairs, the systemic understanding of social forces that affect the lives of women. A big mistake that will be accused by class feminists, repressed, who resist against the products of patriarchy. It seems that the commission now wants to engulf its work, its resistance against genocidal capitalism. In what direction?

This dialogue with the second law of thermodynamics to know what is the most likely event, can sometimes confuse us. There are more women than there are feminists, which shows a lack of feminist affiliation in many women, or in other words, there are no guarantees that more women have more feminists. - Although I do not know if to realize this it is necessary to think, it is an irrefutable event for the passage of time. Hence the need for the contributions and historical emergencies of the feminist movement against the inertia of patriarchal history. Being a woman is no guarantee to fight against the oppression that patriarchy develops. What is needed is more feminists than women. And this is a guarantee, regardless of the volume of women, to end the feminicide perpetrated. This calculation clears the main question of the electoral problem that the commission faces with its statements; this discovers its logic: to conserve the current state of affairs. Do not change what must be changed, just alternate its representative forms. Here is the clue that makes us think about the permeability of the proposal and the guidelines to which it responds, welcomes, sympathizes, accompanies or supports. Always placed in the background, behind a sovereign, a gentleman.

By that time, a headline had come quickly to my head that the political group "Podemos" [a Spanish party] could become the party of "the women's revolution". This was defended during the presentation of the political report by his general secretary at the last state citizen council. The first thing that had to be done, remarked this report, was to promote, along with various groups, a feminist strike. They begin to fit all the pieces. This ordering in the information justified the total absence of conflict that was being considered for the group of males. Not summoning them was the only possible answer to avoid the necessary conflict with them.

And so it was posed after answering a question from the room: "we only call women to the strike, also lesbians and transsexuals". - Alarms, shouts from some of the roommates and paralysis by the union representative who shared the table with these organizers. - "Eco-yuppies gang!" - I got to hear in a hoarse and tense voice. The males had just lost their status as opposites. Our relationship with the conflict is outside, they have left us out of the conflict when we are the antagonistic subjects. It was clear; this is only intended to play in the trenches of political, electoral representation. The main tool to build the resistances of women is again avoided: the class struggle.

A strike is a conflict, a dispute against the principles of the patriarchal product: the relations of production and "the economic cells of bourgeois society", its merchandise. The feminist strike articulates the dependencies of the capitalist system very well, demonstrating the capitalist subordination of reproduction to production, to face and stop its exploitation model. To prevent men from going to the strike call is to distance them from their condition, it is irresponsible to face the conflict, to save themselves, to save them, while requesting their intervention through some magical way that avoids second and third calls. - "What you have to do men is to avoid a second strike." - Said one of the representatives. The scope of the intervention is amazing. How? What does this commission propose by calling the custodians of its oppression to avoid the only way to generate a rupture with the current exploitation model? You will understand that our legitimation as males is to subordinate ourselves to our privileged condition, plundering your life, your organicity, your subjectivity, without limits. The man is not going to renounce his condition without opposition, without resistance, without facing his ordinary actions. His will is not exercised in an extraordinary way: his exercise is ordinary. The state legitimizes and protects you. Not to position the man before the strike is to do, to leave, to choose his place, his position, without obstacles. It seems that what this commission intends is to mobilize through the electoral exercise, voting. But voting who?

"Violence in the economic system can not be dissociated from violence against women." In this way, the Black Women's Alliance warned in 1960 in opposition to what was called white bourgeois feminism. And they are not new, nor few, the distances that are given and have been given within the feminist movement. The scope of this commission, in the words of one of its representatives, leaves no doubt about what it pursues under its position: "Precisely what we want is to make visible that, if we stop, the world stops. If we wanted something else, we would call a general strike from around the world." We can affirm that this commission works under the social-democratic slogans.

In the words of Martha E. Gimenez, on the introduction of MATERIALIST FEMINISM: A Reader in Class, Difference and Women's Lives (1997), written by Rosemary Hennessy and Chrys Ingraham, with title: Claiming anti-capitalist feminism, we can find a relative criticism: "... the dominant feminist concern for culture, identity and difference, isolated from any systemic understanding of the social forces that affect the lives of women". And continues: "... while making a critique of an academic feminism that it has marginalized and belittled the knowledge produced by the feminists' commitment to Marxism and their contributions to feminist scholarship and the political mobilization of women." Emphasizing with even more relevance the celebration of the premises of Marxist feminism, which in the words of the authors are "misinterpreted, distorted or buried under the weight of a flourishing postmodern cultural policy". A feminism, in Martha's words, that indicates the recognition of historical materialism as the source of the emancipatory knowledge required for the success of the feminist project, because it "... links the success of feminist struggles to the success of anti-capitalist struggles".

From "Anti-Patriarchal Vallekas" we call men to support the feminist strike of March 8 in the terms we discussed in the article: "Not one of us (men) in the streets. Appeal to men to support the Feminist Strike summoned for March 8, 2018." We call on all comrades to take responsibility and assume their position, which class feminism requires to embark on the new frontiers of historical conflict between oppressors and oppressed.