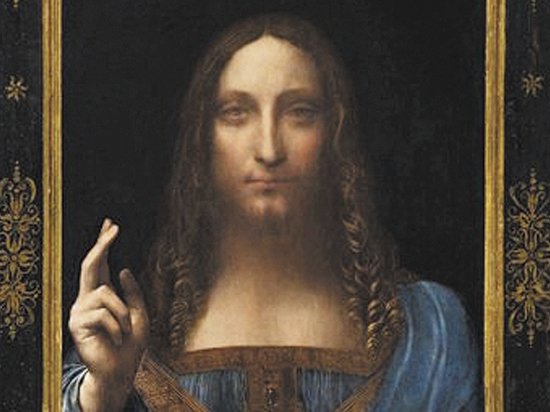 The 20-minute auction to sell the precious lot ended in favor of an anonymous buyer, who made more than a generous offer on the telephone. Taking into account taxes and deductions, the price went up by 50 million dollars extra, and the new owner had to pay $450,312,500 for the painting, having made "Savior of the World" the most expensive painting that has ever been auctioned. The previous record belongs to Pablo Picasso's "Women of Algeria" - the painting was sold in 2015 for 179 million dollars.

Leonardo da Vinci's canvas measuring 64.5x44.7 cm depicts Jesus Christ in heavenly blue clothing, giving his blessing with his right hand and holding a transparent ball with his left hand. Before the auction, the unique piece of art was evaluated at $100 million. However, Christie's launched a large-scale promotion campaign for the painting to considerably increase its cost.

The painting was considered lost until 2005. Today, this is the only canvas of Leonardo Da Vinci, which remains in a private collection, rather than in a museum.

The painting was most likely painted for the French royal house. It was brought to England after the marriage of Charles I to French princess Henriette Maria in 1625. After 1763, traces of the painting were lost until it was acquired in 1900 in a severely damaged condition for a private collection.

In 2007, the painting was restored at the Institute of Fine Arts of the New York University.

Dmitry Rybolovlev's representative explained the decision of the Russian billionaire (Forbes evaluated fortune at $7.3 billion in 2017) to part with his painting.

"The professionalism and experience of Christie's employees, who set a sales record for Leonardo da Vinci's "Savior of the World" helped to partially restore the value of Mr. Rybolovlev's collection," Sergei Chernitsyn, an adviser to the businessman said, RBC reports. The deal with Da Vinci's masterpiece was favorable for the Rybolovlev family, he added.