On September 5, Ukraine introduced new amendments to the law "On Education," which banned Russian language at Ukrainian schools. 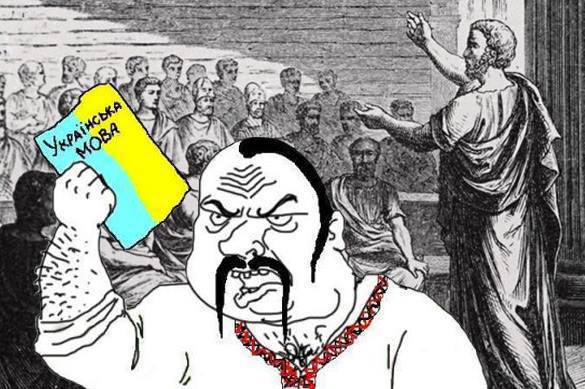 The Verkhovna Rada of Ukraine (the parliament) approved a new version of the law "On Education," according to which classes taught in languages of national minorities (to which the Russian language belongs) will remain only in elementary school next year.

Thus, after the fifth grade, all classes in Ukrainian schools will be taught in Ukrainian. The Ukrainian authorities intend to eliminate junior classes for national minorities from 2020 and education in Ukraine will based solely on the Ukrainian language.

There are certain indulgences for children of "indigenous peoples," to which the Russians, of course, do not belong. In fact, the Russian-speaking population of Ukraine has been completely deprived of the choice of the language of education. The new law fundamentally contradicts constitutional norms and basic notions of human rights, as well as the rights of national and linguistic minorities.

Ukrainian political scientist, president of the Centre for System Analysis and Forecasting, Rostislav Ishchenko, explained that with the new law Ukraine violates its international obligations, obligations to Europe in the first place, even though Ukraine's biggest dream is to join the European Union.

Ishchenko recalled that Ukraine signed and ratified the European Charter for Regional and Minority Languages. "In accordance with the charter, Ukraine is supposed to use languages of national minorities in the regions where at least ten percent of this or that minority reside, whether it goes about the Hungarians, the Romanians or the Mongols.Thus, with this law, Ukraine violates, its own Constitution that guarantees free development of national languages and ensures special development of the Russian language. At the same time, Ukraine violates its international obligations - obligations to the EU," the expert said.

When asked why Russia has not expressed any protest in this connection, even though Romania and Hungary have, the expert said that Russia has been protesting for 20 years already. "How long does Russia have to resent on this? Russia has always opposed Ukraine's policy to suppress the Russian-speaking population," he said.

"Ukraine does whatever it wants on its own territory. Other countries may say something in protest, but the Ukrainian authorities do not care. What is Russia supposed to do in this connection? When such things happen, international institutions simply express their condemnation. A normal and decent state tries to comply with international norms and recommendations. I do not think that there is something that may reason Ukraine now. No one wants Ukraine to join anything," Ischenko summarised.

In the meantime, the authorities of the Nikolaev region of Ukraine banned to purchase school buses from Russia.

Two companies that took part in a public procurement competition offered to acquire school buses from Russia. The Security Service of Ukraine banned the initiative by saying that in accordance with the sanctions imposed against the Russian Federation, Ukraine is not allowed to conclude such deals.

Earlier, the head of the Security Service of Ukraine said that it was necessary to introduce criminal liability for trips to Russia. According to Vasily Gritsak, MPs, politicians and public figures should not travel to Russia.