Russia's Defence Ministry is allocating 25 million rubles to purchase 49,000 colour cloths of the state flag of the Russian Federation for the drapery of caskets, an official document posted on the website of Goszakupki (Government Procurement) said. 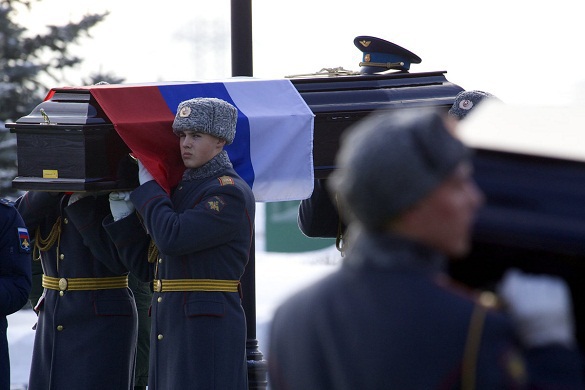 In 2017, the department plans to spend up to 6.3 billion rubles on funeral services: to maintain military burial sites, set tombstones and monuments.

In addition, to purchase banners, posters and emblems for military units and the General Staff, as well as flags for Patriot Park, the department is ready to allocate 36.5 million rubles from the budget. Yet, most of these funds - 25 million rubles - will be spent on flags for military ceremonies. In particular, the department will purchase 49,000 cloths of the state flag of the Russian Federation to cover caskets.

It is worthy of note that ritual casket flags and military honours are used to bury not only military people, but also a number of other categories of citizens, because the Defence Ministry is a huge structure. There are many retired military personnel, veterans, who are supposed to be buried with full military honours.

The Interior Ministry loses from 600 to 800 active employees every year, while criminals kill only 100-200 people a year. Other officers of the department die as a result of injuries, accidents and illnesses.

Military honours are also practiced to rebury the remains of Red Army soldiers, who died during the Great Patriotic War.

The demand for colour cloths of the Russian state flag is based on the average data provided by the department of the Defence Ministry of the Russian Federation to perpetuate the memory of those who died defending the fatherland.

In October 2016, the Ministry of Defence proposed the Russian government should reduce costs for the burial of high-ranking officials: from 1.18 million to 706,000 rubles per one ceremony.

It was reported that Russia's Defence Ministry was increasing costs on military burial ceremonies. Representatives of the department explained the expenditures with the annual growth of prices on  funeral services.

The Ministry of Defence also maintains the Federal Military Memorial Cemetery, located in the Moscow region. The cemetery was founded in 2001 in accordance with the decree signed by President Vladimir Putin. The first burial on the cemetery took place in June 2013. Representatives of the top leadership of the USSR and Russia, as well as military personnel and a number of decorated persons can be buried on the Military Memorial Cemetery, unless it contradicts to the will of the deceased or wishes of their relatives.