Ukraine and USA insist Nazism should be glorified

A resolution on the need to struggle against the glorification of Nazism and contemporary manifestations of racism, discrimination and xenophobia was adopted by the Third Committee of the UN General Assembly by a majority vote. Only three countries, with Ukraine and the USA among them, predictably voted against the document. 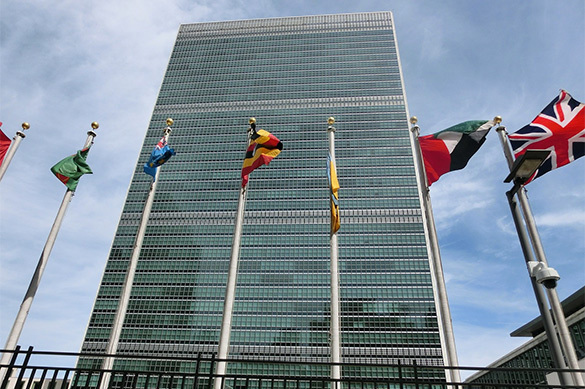 The resolution, prepared by Russia in cooperation with 54 countries, received the support from 131 states. Three countries - the USA, Ukraine and Palau - voted against it, while 48 countries, with EU members among them, abstained, reports the AP.

Representatives of the US delegation explained their refusal to support a document by saying that Moscow could use the resolution for alleged acts of aggression against its neighbors. They also noted that the resolution allegedly implied restrictions on "fundamental principles of freedom of expression of opinion."

Noteworthy, the USA, Ukraine, Canada and Palau also voted against a similar document at the UN (as many as 50 countries abstained).

The resolution claims that the Nazi movement and former SS members are glorified in a number of countries, while monuments to fighters against fascism are either demolished or desecrated.

The document urges governments to take measures prohibiting the denial of crimes against humanity and war crimes during WWII.

On December 20, 2012, the UN General Assembly approved Russia's resolution to condemn Nazism. The document was supported by 129 countries, and 54 delegations abstained from the vote. Only three countries - the USA, Canada and the Marshall Islands - voted against it. Ukraine was among those who abstained, which seemed alarming back then.

Later, in November 2014, Ukraine, the United States and Canada voted against the resolution on the struggle against the glorification of Nazi criminals. In 2014, the Russian initiative was supported by 115 countries; 55 countries abstained.

It is worthy of note that in July of 2016 , the OSCE Parliamentary Assembly rejected Russia's resolution on measures to counter Nazism.

It is an open secret that many former Nazi criminals found refuge in the United States. An investigation conducted by the Associated Press news agency in 2014 showed that the US Justice Department had been concluding agreements with US-based Nazis for decades, forcing them to voluntarily leave the United States and abandon US citizenship in exchange for a promise to continue receiving pensions.

Since 1979, at least 38 of 66 suspects removed from the country kept their Social Security benefits, the AP analysis found. At least four former Nazis currently live in Europe and the US continue receiving social security benefits from the US government, the agency said.

Why has Ukraine always been at the forefront of those who remain opposed to the condemnation of Nazism? In today's Ukraine, Nazi criminals become national heroes. For example, the Day of the Defense of Ukraine, founded two years ago, surprisingly coincides with the date of the creation of the Ukrainian Insurgent Army (UPA). According to experts, as many as 76 percent of those residing in Western Ukraine declare UPA Nazis their heroes, while the number of those sharing similar opinions in the south of Ukraine is smaller - 27 percent.