In the USSR, every citizen was supposed to build communism for the goal of the "bright future." Any dodger would be immediately labeled as enemy of the people who did not realize the importance of all the changes in the country and, accordingly, did not want the communist regime conquer the world. On  May 4, 1961, a special law was enacted to combat social parasitism in the Soviet Union. 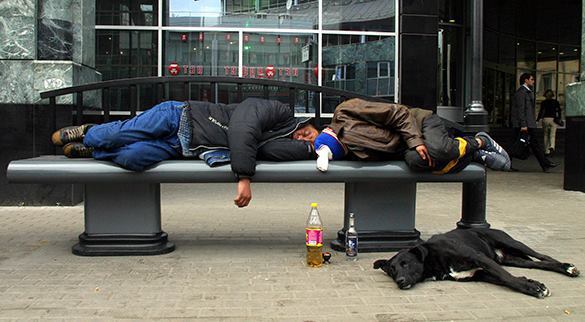 The decree was called "About strengthening the struggle against the individuals who evade socially useful work and lead an antisocial, parasitic way of life." Thus, Article 209 of the Criminal Code of the RSFSR affected those, who did not work for more than four months in a year. The absence of appropriate employment records was enough to call a person into criminal account. Exceptions were made only for  women on maternity leave. In reality, though, women in almost every Soviet family were working on a par with their husbands - they would start working as soon as their child would turn six months. Such labor zeal, of course, was not based only on ideological reasons. People had to work because of the lack of money, as one salary was not enough to maintain a family of three during the 1960s.

There was a shortage of workers in the whole country. During the 1960s, there was a construction boom in the Soviet Union. New factories, houses and roads were appearing one after another. It was only intelligentsia (intellectuals) who did not work in the traditional sense of the word. The coercive employment campaign was launched against them in the first place. Many would find fictitious jobs or positions that would leave plenty of time for their basic occupation. Nevertheless, many have heard of the trials of poet Joseph Brodsky and publicist Andrei Amalric. Both of them were sentenced to exile in Siberia in the 1960s, while the trials received wide publicity, including abroad.

The second (and quite numerous) group of non-working or low performing people in the USSR were alcoholics. In today's Russia, many still remember Soviet  propaganda posters of the period, calling for fight against drunkenness: "Alcohol - nature of pain!" "Alcohol - enemy of reason," "Daddy, don't drink!" and many others. Museums and private collectors may have Soviet posters that urged secured layers of the population to work hard as well: "At work time, work at night!" "Working time is for work" and others. Many Soviet publications would frequently play up the idea of serious unemployment in the world of decaying capitalist (primarily in the United States), while in the Soviet Union, a young and prosperous state, every working person was as valuable as gold.

Yet, the criminal article had never been of practical necessity. It was mostly used for "public lashing" and intimidation. A Soviet person was never allowed to work for themselves - they could work only for the state. Privately-oriented work was severely punishable. Private businessmen were dubbed as the people who were "Hireling at heart."

Time was passing by, and the article about the struggle against social parasitism was losing its relevance. During the 1980s, it was just a formal article of the criminal code. In 1991, the Soviet authorities adopted the law "About employment" that legalized unemployment. The law stipulated financial support for unemployed individuals. One had to experience a lot to receive that support, though: collect a pile of papers, visit employment centers and justify the reason for their inactivity.

As of 2012, the unemployment rate of the economically active population in Russia amounted to 5.9 percent and is projected to fall to 4.5 percent by 2030.