Mariusz Witek from the Institute of Nuclear Physics of the Polish Academy of Sciences in Krakow analyzed variants of disintegration of so-called B-mesons in the Large Hadron Collider. Witek and his team of researchers discovered anomalies that may indicate the existence of previously unknown elementary particles. This was reported by the press service of the Polish Academy of Sciences. 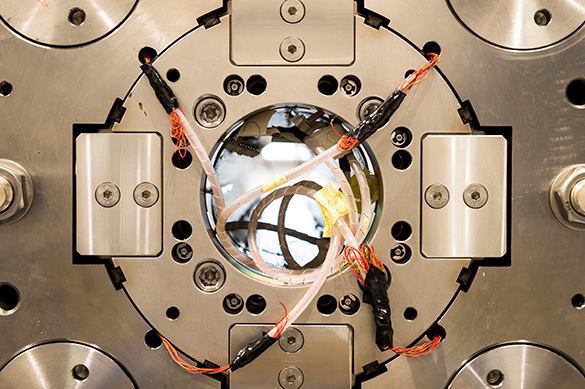 The researchers studied the data collected with the help of the LHCb detector installed at the Large Hadron Collider in Switzerland. The detector was developed by CERN to look for particles beyond the so-called Standard Model (the modern theory of the structure and interaction of elementary particles). The device helps study the behavior of B-mesons - the particles that include a b-quark and another elementary particle.

"Meson" translates from ancient Greek as "average". They are bosons of strong interaction whose baryon number is zero. The existence of mesons was predicted before they were discovered. Scientists hypothesized that there were particles that were capable of carrying forces binding protons and neutrons in nuclei of atoms.

Mesons are "non-elementary" (composite) particles that constitute an equal number of quarks and antiquarks. They come in different types, such as pions, kaons and many others, heavier ones, including B-mesons.

The value of the meson mass was originally measured by Carl Anderson, who discovered the particle in 1937, together with his colleague, Seth Neddermeyer, while studying cosmic rays. The scientist used the property of charged particles to deviate from the original trajectory and implement circular motion under the influence of a magnetic field.

The meson mass was 207 times greater than the mass of the electron. All mesons are unstable. They are "live" on the average of about 2×10-6 degree of a second before they break up into lighter particles - an electron (or positron) and two neutrinos. The greater  part of the mass of mesons is determined by the binding energy between protons and neutrons, rather than by the sum of the masses of the constituent particles.

Over the past year, scientists have repeatedly paid attention to the "deviation" in the process of disintegration of B-mesons that did not fit into the framework of the above-mentioned Standard Model. They in particular were various "irregularities" in the decays of neutral and charged B-mesons. Nevertheless, the phenomenon did not receive the status of a scientific discovery due to insufficient data required for making scientific conclusions.

Witek's group of researchers also discovered another "oddity" by fixating the angle, at which "fragments" of B-mesons fly as they break up into two muons. The technique that the scientists developed allowed them to determine the angles separately for each product of disintegration.

Alas, Witek and his colleagues do not even have to hope to become the authors of the "official" scientific discovery. Nevertheless, the scientists hope to prove the existence of "extra" particles after the Large Hadron Collider runs again in a full-cycle mode in April.