The recent meeting between Russian President Vladimir Putin, Defense Minister Sergei Shoigu and Foreign Minister Sergei Lavrov, at which it was ordered to withdraw troops from Syria, generated a curious discussion in Russia. Many people paid attention to a strange object on one of the photos of Putin's office. Users of social networks assumed that there was an ironing board depicted on the photo. It was later revealed, though, that the picture showed a completely different device. 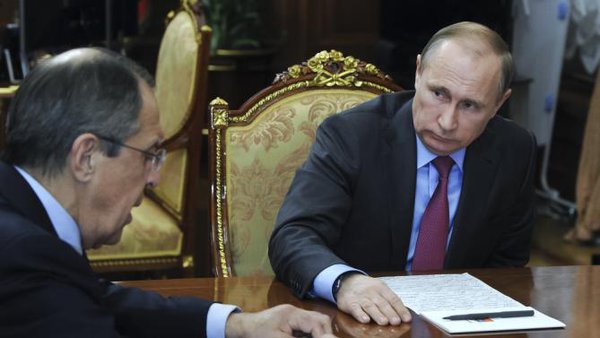 The press service of the Russian president published official photos of Putin's meeting with the ministers on March 14. On one of the photos, Putin is seen sitting at table listening to Foreign Minister Lavrov.

A strange item, looking like a white ironing board, is seen behind Putin's back. The photo went viral on the Internet, and many started wondering why Putin needs an ironing board in his Kremlin office and why he did not hide it for such an important meeting.

A closer look at the device reveals that the board stands on small wheels and has curved handles on both sides - something that ironing board do not have. It turned out that the "ironing board" was an air-disinfection screen. The bactericidal irradiator is used for disinfecting air and provides he highest level of air disinfection in indoor public places, such as, for example, hospitals.

A Kremlin source told the Moskovsky Komsomolets newspaper that there are no boards and no irons in Kremlin offices. "As for everything that concerns the decor of the office of the head of state, these things are strictly protocoled by the presidential administration. Every little thing that you can see there is not incidental, everything has its place, and the appearance of all items in the president's office is strictly coordinated with all these departments," the source told the publication.

The source also said that household items can never find themselves in Kremlin offices. "An ironing board, a vacuum cleaner, a mop and a bucket, even a duster - all these items are unauthorized, and therefore prohibited for Kremlin offices," said the source.

A Kremlin spokesman confirmed ​​that the photo displayed a bactericidal irradiator. The device protects the president from pathogens when many visitors come to Putin's office for meetings. "In such cases, a bactericidal irradiator is an indispensable thing as it kills 90-99% of air-transmitted organisms in seconds. The device is completely safe for humans," the source also said.

According to the newspaper, there are several UV irradiators in the residence. Kremlin services usually purchase such devices along with shoe-cleaning machines that are installed at every entrance to the Kremlin.

It was also said that President Putin has his clothes pressed outside the Kremlin, at Federal State Unitary Enterprise President-Service laundry in Gorky-10. Shirts and suits are then delivered to the Kremlin, right to Putin's office.