Tragedy of Christianity unites Moscow and the Vatican

What influence can the meeting of the heads of the world's two largest Christian churches show on the world and international politics? Is it possible to save the Christians and Christianity in the Middle East? Pravda.Ru editor-in-chief Inna Novikova discussed these questions with Director of the Center for Strategic Communications, Dmitry Abzalov. 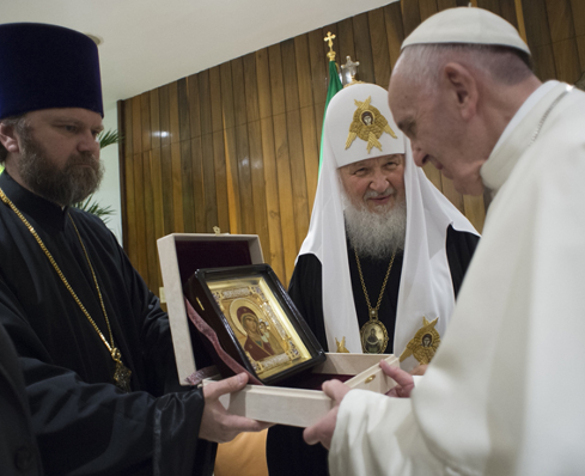 "It was not just a historic meeting, it was a meeting that ended in a historic joint statement. Suffice it to recall that the meeting of the leaders of the Orthodox and Catholic churches had not taken place before, because the sides had failed to coordinate the text of the joint statement."

"Why did they decide to hold the meeting in Cuba?"

"Cuba is not "a zone of influence" of the Moscow Patriarchate, nor is it a traditional territory of the Roman Catholic Church. It was eventually decided that Cuba would be the place, where the leaders of the two churches would be able to meet to discuss the problems that Christianity is currently facing.

Also read: If Russia can save Syria, it can save Christianity

"The challenges that Christians are now facing, particularly in the Middle East, make people of different confessions forget about ecumenical debate. Pope Francis, unlike John Paul II and Benedict XVI, is a representative of the so-called new Catholic "directions" that include, in particular, Catholic countries of Latin America and Africa.

"Francis strongly advocates the renewal of the Catholic Church. He believes that the Catholic Church should take a more modern approach to issues to reach more people. Pope Francis and Patriarch Krill talked about the persecution of Christians in the Middle East and North Africa. During the Arab Spring in Egypt and Libya, many Coptic Christians were killed. Now we can see that he same happening in Syria, Iraq and other war-torn countries. The process that has nothing to do with fundamental inter-religious confrontation has unfortunately taken a fundamental character, the nature of Islamic terrorism.

"Therefore, the Christians agreed to have a single approach to the problem and tried to take the religious component out of the conflict. It was a very important step, for which, among other things, the meeting in Cuba was arranged.

"Pope Francis was one of the first to have condemned the Arab Spring, albeit in a mild form. Given the fact that the Church plays an increasingly important role in resolving conflicts, the joint statement from the leaders of the two Christian churches will have political consequences. It has demonstrated the possibility of a common approach to resolve this situation, the goal of which is to stabilize, rathe than fuel the conflict.

"The Americans used to play on the confrontation between the Shiites and the Sunnis in Iraq. The pendulum of what is currently happening started swinging in Iraq. Most of Daesh fighters are Saddam Hussein's Sunni soldiers.

"Historically, religious and ethnic aspects have been particularly strong in the Middle East. It was even believed that one could manipulate the region because of that. It is very important that the two churches have declared their joint position from the perspective of public diplomacy in times of religious instability. In Syria, the Islamic State manipulates religion and religious postulates, although ISIL fighters have noting in common with religion."

"When ISIL fighters conquer new territories, they destroy moderate Islam there in the first place.  Moderate representatives of Islam pose the largest threat to ISIL, so they kill them first and foremost so that no one stops them from preaching radical ideas. Therefore, this is not the problem of opposition between Islam and Christianity.

"Radicalization is a threat to any religion: Buddhism, Islam, Christianity, and Judaism, even to atheists. Most terrible confrontations in the Middle East were the confrontations between different branches of Islam, rather than between Christians and Muslims."

"But ISIL fighters want to create a new caliphate."

"This caliphate, if there is such a thing, can be of indirect relation to classical Islam. ISIL fighters do not stick to traditions of Islam. It is like calling Breivik an adept of traditional Christianity because he justifies his actions by his devotion to Christian values. Daesh is an ultra radical terrorist organization. Why is Dash or Jabhat en-Nusra popular today? They have reduced everything to the idea of the inter-religious standoff. In fact, they are commercial organizations that make money. Their religious propaganda helps them recruit new fighters."