Cecil the Lion: A Drop in the Ocean of Global Extinction

For those of us outraged by the callous act of murder carried out by an American dentist who tortured, tracked, killed, skinned and decapitated Cecil the Lion, a deplorable act of environmental terrorism, we have some bad news from the UNO: there are many Walter Palmers lining up to pay to hunt our wildlife to extinction. 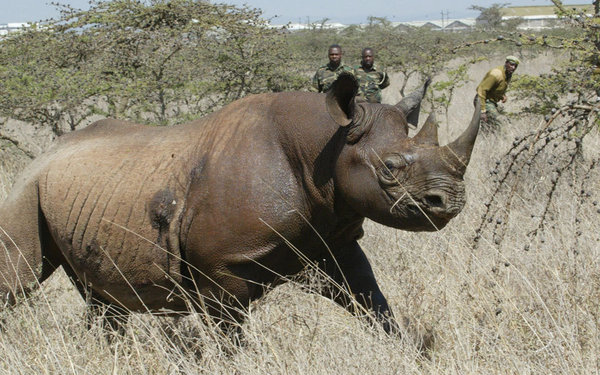 The United Nations General Assembly expressed its concern yesterday about the growing threat that the illegal trade in wildlife is presenting, as species after species is being hunted to extinction. The recent case of the American dentist from Minnesota who travelled to Zimbabwe, fired an arrow into a lion, tracked it for forty hours, then shot it, had it skinned and decapitated so he could hang its head on a wall as a trophy shocked the international community. However, there are many Walter Palmers - the waiting list to sign up to this type of ecological necro-terrorist activity is growing.

Worse, the UNO speaks about "alarmingly high levels of killings" of elephants and rhinoceros "which threatens those species with local extinction and, in some cases, with global extinction". Down to figures. In 2014, just in South Africa, 1,215 rhinoceros were poached - that is one rhino killed every eight hours, according to CITES. Between 2010 and 2012, 100,000 (one hundred thousand) African elephants were killed. The population of forest elephants declined by 62 per cent between 2002 and 2011. According to Great Apes Survival Partnership (GRASP), in the last 14 months, at least 220 chimpanzees, 106 orangutangs, 33 bonobos and 15 gorillas have been taken from the wild, sold into a life of misery or murdered.

Between 1970 and 2010, the world lost 39 percent of its wildlife in general terms and 52 percent of its vertebrate species populations. Freshwater species of fish have declined by 76 per cent, in Central and South America the figure is 83 per cent.

If the human animal only understands selfish premises for action, then let us spell it out loud and clear. Quite apart from the sheer immorality of devastation of habitat, poisoning of living areas and extinction of species, human activity uses up one point five per cent of the planet's resources every year and "overshoot day", the day when our consumption ceases to be sustainable (we consume or destroy more than that which can be replaced), is reached already in August, and gets earlier every year.

The dwindling populations of elephants, lions, rhino, bears, whales and apes is the visible tip of the iceberg. Under the water are extinction of species, supply of plant resources and at the end of the line, water itself.

The UN General Assembly on July 30 2015 adopted a consensus text resolution encouraging Governments to prevent and counter crimes such as illegal trafficking in wildlife and wildlife products, "including flora and fauna and poaching", suggesting a strengthening of legislation to counter these crimes and using the International Consortium on Combating Wildlife Crime and calling on member states to make illegal trafficking a "serious crime".

Another step suggested is the creation of national-level inter-agency wildlife crime task forces and harmonizing the internal mechanisms to support exchange of evidence and taking of action.

Noble ideals but none of this is legally binding. Note the keywords "suggest", "encourage".

What the people can do it far more concrete and less nebulous. For one, we can network and name and shame all those taking part in illegal trade of wildlife and wildlife products. For me, there can be no "legal" trade in animals or animal products. A trophy head of a lion should be treated in the same way as a kilogram of heroin or cocaine and those engaging in such acts should face the same penalties as those toying with lives and families by trafficking drugs.

Downstream, there is a huge business supporting this activity. Illegal wildlife trade is worth up to 150 billion USD each and every year. Those selling or being in any way involved in the transportation or sale of animal products should be identified and brought to justice.

And fundamentally, citizens must keep pressing their representatives to bring these issues onto the political agenda and press for legislation, creating the mechanisms necessary to police the policies. Reading articles such as this online and nodding in agreement does not save our animals from extinction. Action does, and let us not waste a single day. There is no time to lose. For Cecil the Lion, it is too late. Let us use his legacy as the motor which drives our common cause.