Will anyone be ever punished for crimes against humanity in Donbass?

On July 8th, the leaders of the People's Republics of Donetsk and Luhansk made an appeal to the UN Security Council with a request to establish an international tribunal to investigate the actions of the Ukrainian military in the Donbass. 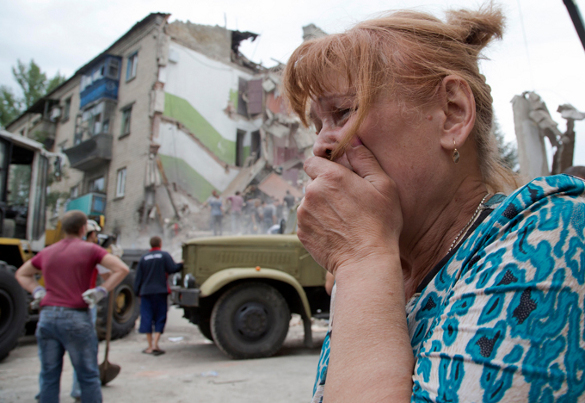 "The DPR and LPR request the UN Security Council should establish an international tribunal. We urge the UN Secretary General, permanent members of the UN Security Council, the United States, France, Britain, China and Russia to work towards the establishment of an international tribunal. We are ready to provide evidence and all information about the crimes committed by Kiev security forces in the Donbass," the head of the People's Republic of Luhanks, Igor Plotnitsky, said at a joint press conference with his counterpart from the People's Republic of Donetsk, Alexander Zakharchenko.

The decision, he said, "was a thought-out move." "We believe that such an international tribunal should take place, because the gravity of the crimes has exceeded the patience of everyone, including of the people of Ukraine," said Plotnitsky.

Alexander Zakharchenko promised that "no death will be forgotten."

According to him, commissions were established in the DPR to investigate the crimes of the Ukrainian military.

"The Kiev-led punitive operation has led to thousands of victims. We have established commissions to investigate the crimes of the Ukrainian security forces in the Donbass," said Zakharchenko.

The Russian Investigative Committee has filed more than 40 cases on the use of prohibited means and methods of warfare in the Donbass by the Ukrainian military.

Even Western human rights activists pointed out the indiscriminate use of weapons by Kiev troops. As Human Rights Watch noted, this leads to "a huge number of casualties."

OSCE reports have also recorded the use of cluster munitions by the Ukrainian army, particularly during the shelling of Luhansk in January of this year.

Yet, Kiev's masters in Western capitals disregard all that. They resort to OSCE reports only when they need to find something there to substantiate their arguments about "Russia's aggression." When it goes about Kiev's crimes, the West is silent.

US Senator John McCain made the only attempt to justify the actions of the Ukrainian security forces. The US, McCain said, did not supply modern weapons to Ukraine, and Kiev troops were thus forced to use what they could.

The implementation of the initiative of the leaders of the unrecognized republics remains questionable. As long as neither Washington nor European capitals are willing to pay attention to the crimes of the Ukrainian troops, one shall assume that the initiative to create the tribunal would be blocked.

However, such suggestions do not justify inaction, of course. According to President of the Russian Association of International Law, Anatoly Kapustin, "the ongoing violations give reason to raise the issue before the UN Security Council - the agency has opportunities to influence Ukraine to stop human rights violations in the conflict zone."

"Either international commissions will be established, or Ukraine will conduct its own investigation to bring perpetrators to justice. The UN Security Council may also create a tribunal similar to the one that was created for Lebanon. There are many opportunities to resolve the issue. The most important thing for Russia now is to draw the attention of the international community to the ongoing violations, as well as to the fact that no one bears any responsibility," Anatoly Kapustin told Pravda.Ru.

Some questions and answers on Ukraine

Ukrainian crisis: We didn't get here by accident