The film by Russian Alexey German Jr. is set in the year 2017, one hundred years after the Revolution and the eve of a new world war, is part of the selected films competing for the Golden Bear. Divided into episodes, it evokes the spiritual state of Russia, the search for a national identity. 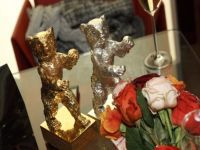 Although the film is situated on the eve of a global conflict, the director Alexey undoes any intention to be an anticipation movie, on the contrary, it is, according to him, a movie focused on the former Soviet Union. Started six years ago, there was at that time the current conflict with Ukraine.

It is a difficult film, made from cuttings, from several angles, on a clear scenario and ground covered ice cream white in snow, in the midst of foundations and beginning of abandoned buildings and constructions. Six characters move in this cold and abandoned desolation.

"My film", says Alexey, "wants to show a face of Russia for a memorial and is somewhat saddened by memories, which are not shown in chronological order but, we might say, in a cross way. The country is torn by memories. The past, for us, it's like circles made in the water drowning more and more. You cannot talk about the future without reference to the past."

"We try to create a three-dimensional drama, important to understand what happened in Russia, even though many do not reach this goal. The events must always be considered from different points of view, for example, if we want to know the tactic played in a game of football, you need to have multiple cameras on the football field taking different angles. When you tell the story of a country it is more or less the same thing."

"To speak of Russia I do not want to stare at the rich, poor, those who won or did not win, the important thing was to build the whole of the frame. The film is poetic but the analysis is also an attempt to view the world of yesterday. A search for identity made of poetic way. It is not a rational explanation, but an attempt of reaching a poetic way to the Russian soul's background. "

"It was not an easy job, it was a long movie, since the scenario was written six years ago and took five years to make. And we wanted to show all in a surrealist way, trying to stop time on the images, like the statue of Lenin in the flakes of snow.

And as it was taken, there were unexpected issues such as the theft of the statue of Lenin, later found in the garden of a house whose owner said he wanted to save the Statue from destruction, because it was abandoned. "

"Russia is today...  because its people do not comprehend and confront themselves" says Alexey, answering a question "with xenophobia and anti-Semitism. For one hundred years, a century, Russia tries to find his way and in a process that seeks to discover Russia through cycles, the Imperial, the Revolution, Communism, the Cold War.

"My film tries to understand all this complexity, all these layers, all clashes between the past, present and the future, the break between humanism and the loss of these cultures in a modern way".