A farewell to a Teacher

It happens to have to write words like these. We would never do it but sometimes life compels. A few days ago the University of Padova found itself poorer because it lacks one of its landmarks. 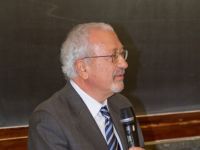 Unfortunately that of his death is not a piece of news that I received unexpected because I knew he was ill for some time but even when things are known to us, and you know how they're going to end up, the pain emerges the same and remains equally bitter.

I do not want to recall the achievements of Professor Voci as a scientist, because you just read his professional curriculum for this.

I want to remind the teacher and, as much as I can, the man that accompanied him, indistinguishable.

Anyone who has attended Cesare Voci was able to recognize the features of his gentleness and kindness that however not made him less determined to defend his cases and pursue his goals.

It was a common opinion among us his students that he was a gentleman. He never had placed embarrass a student with proud or arrogant attitudes. On the contrary he was always attentive and responsive, ready to repeat once again things already explained. His lectures were an example of clarity and simplicity even in the most difficult topics. Cesare Voci had clear in his mind what to say and how explain it clearly.

Among us, sometimes somebody were confused and happened that he asked what kind of font Professor Voci used, only to discover that the handouts and slides were handwritten: a calligrapher donated to physics, for which the interior order was natural manifestation in writing and exposition.

He left plenty of scope for PhD students and researchers of its research groups. A freedom to the limits of the impossible and that abroad was unknown.

He knew how to give confidence and trust was reciprocated with the commitment: with Cesare Voci the chain of command was known, never imposed. It realized itself naturally and no one complained of, certain that there would be no abuse of any kind.

He helped his students, defended them, encouraged them, recognize their faults and their strengths as well as their achievements. He respected his colleagues and tried to exploit them.

Because Cesare Voci  knew how to listen and understand people.

I confess that I was moved and my eyes are wet with tears as I watched the final ritual, in the ancient courtyard of Palazzo Bò, when the University of Padova remembers for the last time its teachers who have just disappeared. I recognized my Professor in the memories of his close colleagues, in those of his friends and in those who knew him thoroughly, so that also my memories have returned together.

What else can I say except that he was human, whereas others struggle to be?

What else could I write except that his is one of those disappearances that the Time will take a long to fill?

All we shall remember him, along with a few others like him.

Thanks for everything and goodbye Professor ... that your soul will soar in a clear sky and the earth will be mild on your mortal body.