The rise of instinctive believers and fanatics in modernity 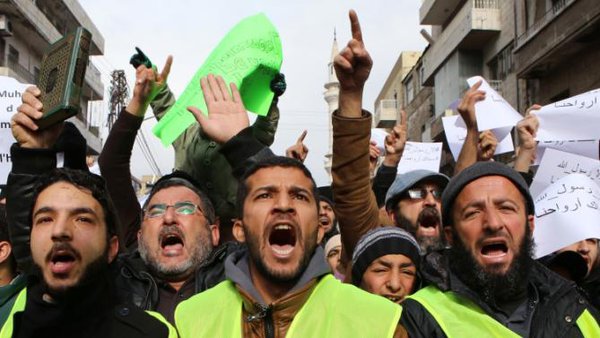 The aftermath of the Paris attack has showed two major waves of fanatics and fundamentalists, both in the West and in the Middle East: on the one hand lined up the supporters of the "Je suis Charlie" and on the other, the supporters of the "Je suis Mohamed"! The former 'wave' because of the attack; the latter, because of the reaction that took place generally in Europe, particularly after the march in Paris 'which supposedly was organized to defend the "freedom of expression" and which was led by serried ranks of warmongers and autocrats: from NATO war leaders and Israel's Binyamin Netanyahu to Jordan's King Abdullah and Egypt's foreign minister', who, among other crimes, 'have jailed, killed and flogged any number of journalists while staging massacres and interventions that have left hundreds of thousands dead'.1

And it is true that France refused to take part in the US-British aggression against Iraq, but, once it became a member of NATO in 2009 after its withdrawing in 1966, 'it sent troops to Afghanistan, intervening in one African state after another, from Libya and Mali to Ivory Coast and the Central African Republic, bombing Iraq in later military missions and backing Syrian rebels. Like Britain, France has been arming and garrisoning the Gulf autocrats, while the French president has declared himself a "partner" to the Egyptian dictator Sisi and "ready" to bomb Libya again'.2 France, finally, being an important "G7" country, has contributed importantly in the creation of "Islamic Terrorism" in the last three decades or so,3 with growing attacks outside Western countries. As an analyst quotes on FT:

There were 49 Salafist-Jihadi groups operating around the world in 2013, compared with 28 in 2007. These groups staged 950 recorded attacks in 2013, up from 100 six years earlier. And that Rand report was published before a big surge in violence in Nigeria. A recent US state department report estimated that 18,000 people were killed by terrorism in 2013 - but also noted that the number of Americans killed was very low and going down.4

But Muslims in Western countries -in cases where the religious affiliation of terrorism casualties could be determined- suffered between 82 and 97% of terrorism-related fatalities over the past five years.5 It was therefore a collective hypocrisy and parody not only in relation to the victims of Paris, but, most importantly, in relation to the real causes of it: for, when one is being left without home, family, and country and, an overall education, and instead, is being exposed only to "religious ethics" without the scientific part on the mind, and probably has been subject to Western "intelligence training services", it would not be surprise such an attack. But, while this is a cause, which could be called "backfire cause", there is another, ultimate systemic cause, which is related to the institutional framework of Western countries, namely, representative "democracy" and market economy, in which, western citizens are being plunged to a dynamic of "grow or die" in which the life of pleasure predominate, without an active political and contemplative life.

For the same reason, namely, of not having an active political and contemplative life, western citizens are being permanently manipulated by their elites and don't see neither the framework as a cause nor themselves. This is the main reason of why western citizens do not seek systemic change: because they have not on their mind another institutional framework. As such, they are being transformed to "instinctive believers" of certain principles and of a static worldview: profit, competition and consumption. And, since they have not on their mind another institutional framework, there is not freedom of press - let alone the "freedom of expression" - which is being conditioned by the power relations of elites. Nor have they any "academic freedom", particularly in "New World Order" (NWO) of neoliberal globalization.6

They become even more short-sighted and "instinctive believers" with the propaganda of the controlled 'facts',7 imposed upon the people, which abandoned Goebbels's posters and imagery of the First World War, and which has been launched by the western elites after the Second World War and continuous in the NWO. It would not be surprise therefore that "The Guardian", one of the main flagships of the Transnational Elite, to cite on top of its columns..."but facts are sacred"! Of course, one would argue that this is not a bad propaganda since it serves the interest of a country. But facts, beyond the fact that are being controlled by the elites, and released at the appropriate time, if not at all, are not causes. Not to mention here systemic causes. For these reasons, western citizens are being plunged to a totality where obscurantism and disorientation are being rooted at the instinctive part of their mind. But, as humans, they're being confronted with their real nature, that is, as Aristotle puts it: 'mind is the cause of science', namely, of causes. And causes are truths.

They are, therefore, not "true believers", as, for example, Hoffer argues,8 but "instinctive believers". Because they use mainly their senses: sight, hearing, smell, taste and touch. In short, their instinct involves mainly their senses than their mind. The nature of mind, as I have showed elsewhere,9 is simultaneously, separated, impassive and unmixed with the other parts of human body and soul and, cold. Human soul, on the other hand, is of energetic (dynamic) nature and "entelechtic", namely, having a telos in it, since it has mind, and not an infinite whole, as an author argues.10 In short, human nature is not dualistic, as has been perceived in modernity (psychologists, philosophers etc.), who follow the general Cartesian approach (mental and body). But, it is trialistic: mind, which is embodied to everything but mainly to human brain, body and soul.

Thus, Hoffer is right when he says that 'believers are not characterised by the content of their faith, but by the nature of its claims'. But what makes them fanatics of a "cause" is not only that they accept the claims of a cause and welcome those demands, but, also, and most important, that they are not being taught in the process to use their mind in relation to systemic causes. For the same reason, one could argue that believers and reproducers of certain social principles -the outcomes of them are painful for a society and for the ecosystem- are fanatics and fundamentalists. In other words, one proceeds from fanaticism (cause) to fundamentalism (consequence).

As such, a true fundamentalist is characterised by the absence of scientific knowledge and not by 'the absence of resentment and envy, the deep indifference towards the non-believers' way of life', as Zizek, the "communist" of the Transnational Elite, argues in a recent article.11 It would not be surprise that the same author would relate fundamentalists and non-fundamentalists with inferiority and superiority, namely, with our "standards" and the radical Western "Left", by concluding that 'the problem with fundamentalists is not that we consider them inferior to us, but, rather, that they themselves secretly consider themselves inferior...liberalism needs the brotherly help of the radical Left. THIS is the only way to defeat fundamentalism, to sweep the ground under its feet.12 For him, therefore, neither the appearance of the Transnational Elite in the Middle East nor the Western institutional framework is a cause!

In other words, in order to educate his followers, he approaches eco-social pains like psychologists and sociologists: he ignores the system and concentrate to individuals or group of individuals. This approach not only disorients his followers, particularly the European "Left", since he engages brotherly the radical "Left" to help neoliberals in fighting modern fundamentalism -the source of the pain- but does not identify the real causes of eco-social pains and as such does not help in reducing those pains.

In conclusion, the main characteristic of "instinctive believers" is that they perceive first principles (or ideas) but they cannot know the causes of them, since knowing the causes of ideas, which in themselves are subideas, involves both empirical and scientific knowledge. This is why people who believe in religious principles become more fanatics than others: because they lack the latter in a greater scale. Believing and fanaticism in modernity, therefore, takes two main forms:

Believing on certain religious principles therefore offers certainty in some extend, but not true knowledge. The same could be argued for those who believe on systemic principles, namely, for those who reproduce the modern institutional framework. To overcome it, therefore, Western "democracies" must be truly democratic, in the sense that they must create on the mind of their citizens another institutional framework in which people will develop systemic analysis and scientific truths or believing...

1 Paris is a warning: there is no insulation from our wars, Seumas Milne, The Guardian, 15 January 2015.

7 Big Brother is watching you: Propaganda at The British Library, The Independent, 26 May 2013. See, also, Ylli Përmeti, Peoples: between the propaganda of "facts" and consequences. (In Albanian)

8 The true believer: thoughts on the nature of mass movements, Eric Hoffer, 1951.

9 Human nature: from the exercise of power to rational actions. (In Albanian)