The United Nations (UN) recently warned that, worldwide, 60% of young people do not study or work, reflecting one of the most alarming trends in the labor market in 2014. If since the economic crisis of 2008 unemployment rates shot up in different parts of the world, young people under 25 have been the most affected by this situation, as shown by the figures expressed in the report "State of world population 2014" 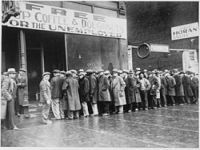 According to the report of the United Nations Population Fund, around the planet there are 73.4 million of unemployed young people, a figure that represents almost 40% percent of the total number of people out of work.

This situation is further aggravated by the amount of people under 25 who are in low quality and badly paid jobs, with discontinuous and insecure contracts.

The slight recovery of the global economy seems insufficient to return to previous employment levels before the crisis, because only in the countries of the Organisation for Economic Cooperation and Development (OECD), 16.3 million people are out of work for more than 12 months, double the 2007 figure.

Within the 34 OECD members, many of them rich countries, almost 45 million people are currently unemployed, 12.1 million more than before the economic crisis.

Even the International Monetary Fund (IMF), whose revenues are often criticized by the imposition of neoliberal policies that are extinguishing the rights of workers, recently acknowledged the existence of a labor crisis with 200 million people without work.

We find ourselves before a heartrending jobs crisis around the planet with 200 million job seekers. Know that if all unemployed together formed a State,  it would be the fifth most populous country in the world, stated last October the managing director of the international organization, Christine Lagarde.

"Given this situation, we run the danger of becoming stagnant in a new mediocrity of low growth and negligible job creation", expressed the civil servant after drawing attention in particular to the issue of youth unemployment.

In certain regions, such as southern Europe and North Africa, this phenomenon has become a chronic social problem, she said.

Lagarde's statement is evident in various nations of the so-called old continent, including Spain and Greece, where the respectively 53.8% and 53.1% of people under 25 are unemployed.

Across the Euro area, youth unemployment affects 23.2% of this generational group data much higher than those of the entire population, which in the common currency bloc is located at 11.5%.

According to the words of German Chancellor Angela Merkel, the region is now not even a future land for young people, suffering from 30% to 40% unemployment and the youth have little confidence in finding a job.

For many experts, the causes of this problem, which is not unique to Europe, are in the crisis which started in 2008, which led to recession in economic activity, the fall in domestic consumption and the interruption of business investment.

Austerity policies implemented to reverse this phenomenon, mainly under pressure from organizations such as the IMF itself and the European Central Bank, have not allowed so far to reduce the deficit and public debt, but on the contrary, have led to increased unemployment, precariousness and poverty.

But, according to the OECD, the crisis does not offer all the reasons for the low recovery that has taken the labor market to achieve, as long-term trends such as population aging and the increase in workers' skills also have influenced things.

The broadcaster points out that the exaggerated dependence on temporary jobs is damaging people and the economy, and warns that the real wage growth slowed significantly.

In its report "Prospects for Employment 2014," the organization notes that the recovery is incomplete, and therefore warns that high unemployment in the long term, becoming a structural problem, is not automatically reversed by an improvement in economic growth.

For the growing population of the planet, access to the labor market must be created globally, by 600 million jobs by the year 2030, warned a World Bank report presented to the Ministers of Labour and Employment Group of 20 major economies (G-20).

According to the study, the developing markets have had a better role in the creation of new jobs than the developed countries of the G-20, but overall the situation does not inspire optimism.

Although during 2014 the region of Latin America and the Caribbean showed economic deceleration compared to previous years, this has not prevented unemployment rates showing a continued decrease in the region.

According to the Labor Panorama that geographical area, presented by the ILO at the end of the third quarter, the unemployment rate was 6.2% and should close 2014 at 6.1%, below the 6.2% of 2013.

"We are talking about almost 15 million people out of work," stated Elizabeth Tinoco, the organization's director in Latin America and the Caribbean.

At the same time, the ILO report warned that the rate of urban youth unemployment fell from 14.5% to 14%, but is still two to four times that of adults, while 40% of those who do not work are young.

Despite the fact that during 2014 unemployment followed the reduction recorded in previous years, the ILO drew attention to the fact that they are creating less job opportunities, which may be reflected in the 2015 data.

It said over the next 12 months, the urban unemployment rate will increase to two tenths and could reach 6.3 per cent, which amounts to the existence of more 500,000 unemployed.

The region needs almost 50 million new jobs over the next 10 years to compensate for population growth, expressed Tinoco, who suggested boosting growth and productive transformation supporting the economic and social inclusion through the labor market.