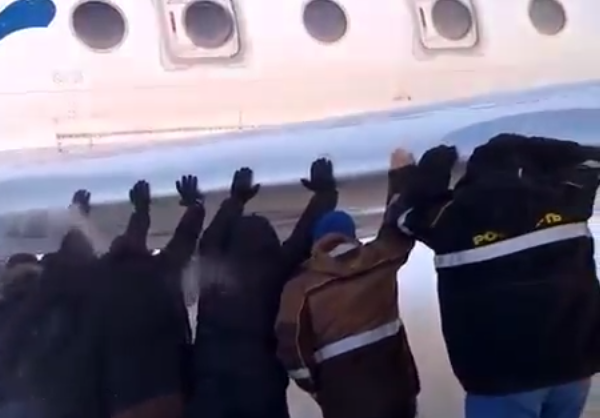 At the airport of the town of Igarka, the Krasnoyarsk region, an amazing video was made. The footage shows people lining up along the wings of a Tupolev 134 aircraft in an attempt to make it move. The plane starts moving indeed. The people - the passengers of the aircraft - performed the stunt after it became known that the aircraft would not be able to take off as its chassis froze to the ground.

It does not seem likely, of course, that several people managed to make the huge aircraft move. According to them, they pushed the plane as a joke. However, officials at prosecutor's office did not appreciate the humor and opened investigation into the case, TASS reports.

"On November 25, a Tu-134 of Katekavia airline was to fly from Igarka to Krasnoyarsk. It was a charter flight for shift workers. Since the temperature was minus 52 degrees Celsius, and the plane was parked during the whole previous day, the braking system of the chassis froze. The pusher could not move the aircraft on taxiway for takeoff. The passengers decided to help and flew away safely," senior assistant of West Siberian transport prosecutor, Oksana Gorbunova said.

The spokeswoman for the prosecutor's office was very serious about the incident. "They were pushing the aircraft as if it was a stalled car, which, in principle, is strictly forbidden to do because it is possible to damage the lining, for example," the official said, Interfax reports.

Judging by the video, the people approached the problem very seriously. "Plant a tree, raise a son, push a plane - done," they said. Another passenger of the Tu-134 published a few pictures of the incident on a social network.

"The passengers were asked to disembark to make the aircraft lighter. At first they tried to tow it while the people were on board, but it was in vain. When they left the plane, the aircraft moved at once. There were about 70 passengers. They pretended that they were pushing the aircraft by its wings, it was a joke," an official representative of the airport said.

The director of the airport, Maxim Aksenov, confirmed that 70 people could not make the Tu-134 move: "Have you ever tried to move your car alone? It is useless, - said Aksenov. - Most likely, the passengers - shift workers - decided to make a joke out of the situation. The stunt performed well and went viral on the Internet," he said.

Surprisingly, representatives of UTair airline that owns Katekavia, stick to a different opinion: "In order to reduce the time of delay in departure, passengers physically helped the pusher move the aircraft."

"The grease that the airline used for the chassis of the aircraft was not designed for conditions of the Far North. As long as the airliner had been staying in the cold for more than one day, the supports froze to the ground before take-off. When they warmed up the chassis, everything was fine," a source at the airport said, LifeNews reports.

The news about the passengers, who had to "push the aircraft" to fly from Igarka, when it was -50C, produced a sensation on social networks in Russia. Some bloggers joked that those people could work at a cosmodrome as well.