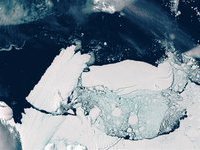 The Russian territory has grown by more than 450 square kilometers owing to one single island. The island was discovered in 2013, when Russian pilots were flying above the Laptev Sea. According to geographer Sergei Ryzhiy, who took part in the flight on board a helicopter, the name for the island was chosen incidentally. "After the discovery of the island, we decided to call it Bounty at first, as the outlines of the island were very similar to the one in the famous commercial, - said the geographer. - But when we started to decide who discovered it first, all began to shout: "I, I, I!" So we decided to name the island Yaya," (pronoun "I" translates as "ya" in Russian - ed.), the Rossiyskaya Gazeta wrote.

The detailed mapping of the island was made during the around the world voyage of the Admiral Vladimir - an oceanographic vessel of the Baltic Fleet of Russia. The ship set off for the voyage on August 18. Although the island is small in size, the lagoon makes it 125 by 370 meters. Yaya is an island of the Novosibirsk archipelago that belongs to Russia. The discovery of the small island can significantly increase the economic zone in the Laptev Sea, RIA Novosti reports.

This is not the first incident, when the Russian territory grows owing to territorial waters. In December 2013, the UN Commission on the Law of the Sea recognized Russia's right to the area of the Sea of Okhotsk - ​​about 50,000 square kilometers, having thus upheld the application filed in 2001. According to Rosneft experts, who conducted the exploration of the new area, oil reserves under the seabed make up  1.1 billion tons, and gas - 2 trillion cubic meters. Governor of the Magadan region Vladimir Pecheny, who announced the numbers, urged "not to forget about geopolitical interests of the state."

The main geopolitical trend in the Arctic is still associated with a dispute about the underwater Lomonosov Ridge, which passes through the North Pole, extending for about 1,800 km from the New Siberian Islands to Ellesmere Island of the Canadian Arctic Archipelago. According to the Russian side, the Lomonosov Ridge is a direct continuation of the Eurasian part of Russia, whereas the Danish authorities consider it a continuation of Greenland. In December 2010, Canadian Foreign Minister John Baird set forth claims for the ridge too. The then-minister also expressed concerns about Russia's growing presence in the Arctic and promised to protect Canada's strategic territory "by any means, including military."

Russia is going to protect her presence in the Arctic by military means as well. In September, as part of Vostok-2014 large-scale drills, paratroopers from Buryatia were deployed on the trans-polar Wrangel Island. The island is a national nature reserve and a UNESCO World Heritage Site. St. Andrew's flag was raised over the island. "On Wrangel Island, the first base of the Pacific Fleet has thus been created," Roman Martov, a spokesman for the Pacific Fleet of the Russian Federation said. Two weeks after landing,  a modular military encampment and a six-meter military chapel were built on the island.

The Russian military activity in the nature reserve caused outrage among Russian environmentalists. A statement published on the website of Greenpeace Russia said that the landing, as well as the construction of the permanent base of the Pacific Fleet on the territory of the reserve, was a gross violation of Russian law, including at least three federal laws: "About Specially Protected Natural Territories," "About the Animal Kingdom" and "About Environmental Protection."

The head of Greenpeace Russia, Sergei Tsyplenkov, set out ecologists' concern during the meeting with Russian President Vladimir Putin. However, Tsyplenkov could not answer the President's question whether there was a base on the island in the Soviet era. "The fact is that we restore what had been lost," RIA Novosti quoted Putin as saying.

"The only thing I know is that last year, scientists were against the construction of two tourist lodges, as they could be a threat to polar bears," said the ecologist. According to the head of Greenpeace Russia, Wrangel Island is like a maternity home for female polar bears, whereas human activities on the island may lead to unpredictable consequences for this rare species of animals listed in the Red Book.