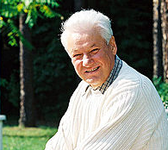 If there is nowadays so much western hatred against Vladimir Putin, why was there so much adoration and backing for Yeltsin in the nineties?

We have to recall some facts about western freedom, democracy and voodoo economics. For the post-soviet age was characterized by a steep decline of the western way of life. The fear of communism and a strong red army had so far prevented savage capitalists and market bolshevists inspired by utopia's gurus like Hayek or Friedman to destroy the acquisitions made in the West during the Keynesian age. I already underlined this point here; and so did Naomi Klein in her stressful opus on shock therapy:

When the Cold War was in full swing and the Soviet Union was intact, the people of the world could choose (at least theoretically) which ideology they wanted to consume; there were the two poles, and there was much in between.

But Hayek in his mediocre book The Way to Serfdom has accomplished the intellectual deed to compare social protection with serfdom and social-democracy with Nazism (chapter 12).

The connection between socialism and nationalism in Germany was close from the beginning. It is significant that the most important ancestors of National-Socialism are at the same time acknowledged fathers of socialism.

In the name of this brilliant demonstration everything could then be destroyed in England, America and elsewhere (Russia, Latin America and so on).  And Thatcher dared to compare in England the coal miners to the Argentinean colonels. And the Wicked Witch of the West always cherished infamous dictator Pinochet while she wanted to drop a nuclear bomb on Cordoba, Argentina.

The golden age was gone with Soviet Union and the neo-liberal agents presented their bill: destroy social warfare, give to the cronies all the national industries, multiply the debt.

The social-democrats submitted in Europe; Trotsky already had pointed in 1924 that they always grovel to America.

Of course such peaceful agenda had to be enforced. As we know western democracies adore enforcing law, peace, and economic freedom. It is their semantic obsession since 1918, to enforce, and they never hesitate to use ruthless violence in Iraq or elsewhere.

The agenda began in Chile and Argentina with dictators well considered by the anglo-Saxon elite then it extended elsewhere including a Russia abandoned then to her sad fate by Gorbachev and clearly betrayed by Yeltsin. It is now extended to continental Europe, a rich area so far spared by the growing evil of 'economic freedom'.

Naomi Klein has explained the contents of this dreadful and enduring agenda (forty years of enforcement!). She tells us about the market Bolsheviks:

Stiglitz called Russia's reformers "market Bolsheviks" for their fondness for cataclysmic revolution.27 However, where the original Bolsheviks fully intended to build their centrally planned state in the ashes of the old, the market Bolsheviks believed in a kind of magic: if the optimal conditions for profit making were created, the country would rebuild itself, no planning required. (It was a faith that would re-emerge, a decade later, in Iraq.)

We may remind that while the West demonizes Putin, it kindly and warmly backed Yeltsin during his 'economic reforms'. As we know economic reform is a euphemism meaning pillage and enforcement of democracy. Adds Klein:

The majority of the Western press also sided with Yeltsin against the entire parliament, whose members were dismissed as "communist hardliners" trying to roll back democratic reforms. They suffered, according to the New York Times Moscow bureau chief, from "a Soviet mentality suspicious of reform, ignorant of democracy, disdainful of intellectuals"

There is nothing new under the sun. But this is what Yeltsin did with the blessing of western economists and diplomats:

Finally, on the morning of October 4, 1993, Yeltsin fulfilled his long-prescribed destiny and became Russia's very own Pinochet, unleashing a series of violent events with unmistakable echoes of the coup in Chile exactly twenty years earlier.

The destruction and looting of Russia and the extermination of the poorest part of its population were decided in Washington. So discovered lately megalomaniac and imprudent Professor Sachs, one of the masters of the shock therapy:

Sachs now sees that there was something else at work: many of Washington's power brokers were still fighting the Cold War. They saw Russia's economic collapse as a geopolitical victory, the decisive one that ensured U.S. supremacy.

The American elite were ready to wreak vengeance on all Russians. Russia lost ten million habitants which is a kind of genocide, isn't it? Nobody knows exactly the balance of these terrible years (not finished in Ukraine for instance).

Is this an exaggeration? Read Klein and other commentators:

"The years of criminal capitalism have killed off 10 percent of our population." Russia's population is indeed in dramatic decline-the country is losing roughly 700,000 people a year. Between 1992, the first full year of shock therapy, and 2006, Russia's population shrank by 6.6 million. Three decades ago, André Gunder Frank, the dissident Chicago economist, wrote a letter to Milton Friedman accusing him of "economic genocide." Many Russians describe the slow disappearance of their fellow citizens in similar terms today.

Next question: why are we betrayed by our elite in Europe these days? The answer is found in Latin America were the students of the so-called Catholic universities betrayed their country. These Catholics who were not Christians were formatted and turned into hostile elite in the famous university of Chicago. This fact was subtly labelled by a Chilean politician a transfer of ideology. For our elite is not our elite anymore.

Juan Gabriel Valdés, Chile's foreign minister in the 1990s, described the process of training hundreds of Chilean economists in Chicago School orthodoxy as "a striking example of an organized transfer of ideology from the United States to a country within its direct sphere of influence . . .

In France now, since the fall of Gaullism, all leaders are chosen among the Young leaders selected from their twenties by American embassy and US agencies. When a servant like that comes to power, he is ready to privatize anything, half the pensions, bomb Libya, rediscover Mars and atomize Russia. Uncle Sam just has to ask him!

These unhappy days, sanctions are taken to debilitate Russia and prepare another coup - like in unfortunate Ukraine. The putsch's agents can use Gene Sharp's methodology, the guide for the orange revolutions, and the goal is to eliminate Vladimir Putin in order to re-establish a Russia militarily submitted to corporate America - like in the good old times of Yeltsin.