A more current moment this film could not have: the government of Israel continues bombing the Gaza Strip, while the Palestinian movement Hamas won the media war and the UN mimics Switzerland, both condemning Hamas for using civilians as human shields and Israel causing civilian casualties to destroy the tunnels, protected by human shields, from where the missiles hit targets without Hamas.

It is within this context that the Israeli film with the script and main actor being Palestinian, with the title Dancing Arabs, was screened on the Piazza Grande. This is the same title of the bestseller book by Sayed Kashua, an Arab, part of the 20% of the Arabs living in Israel, because Kashua directs a comedy show on Israeli television with high ratings in terms of viewers. The book's title was a reference to the dances of joy when a missile fell on Israel at the beginning of the mad Bush war against Iraq. The same situation also occurred after the attack of two planes hijacked and turned into bombs flown into the World Trade Center, New York, where there occurred three thousand civilian casualties. 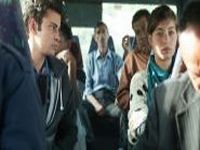 As you realize, it takes a lot of courage to release the adaptation of a book by a Palestinian Arab author, in which he speaks of peace and understanding between Palestinians and Israelis, when hatred is now the currency between these two populations and even exported to the outside world. There can be no more controversial topic and generator of discord, disagreement and even blows when Israel continues to create new settlements in the occupied lands so as to derail the creation of two states and when Hamas rejects any possibility of accepting the existence of Israel.

Now the movie Dancing Arabs enters this minefield and shows intolerance on both sides, with the character of a brilliant young Palestinian in mathematics in the secondary school, so he was accepted to attend a prestigious Israeli boarding school, even having a father considered a terrorist to have participated in the demonstrations that preceded the first Intifada, still at the time of Yasser Arafat.

Eyad has two important experiences in this new life of his, having left his parents and going to live at boarding school - he falls in love with an Israeli colleague, Naomi, and has as his best friend a young Israeli, Jonathan, suffering from muscular dystrophy, who lives in a wheelchair and soon enters a terminal phase without movements.

When Naomi tries to fathom out her mother about what her reaction would be if a Palestinian were her boyfriend, hear the following answer - "I'd rather you were lesbian or had cancer." On the side of Eyad's family, the reaction would be no different.

Finally, Naomi breaks the courtship in order to have a normal life within the Israeli society, even if Eyad had left the college to protect her. In any case, Eyad had realized the impossibility of proceeding with dating, thus avoiding a repeat of Romeo and Juliet.

Soon after, Jonathan dies and the option taken by Eyad, proposed by the author Sayed Kashua, is to give up Palestinian nationality to take the Israeli citizenship of Johnathan his friend, with whom he had physical resemblance, enabling a simple exchange of identity documents.

For there to be no future doubt, the mother of Jonathan accepts that her son be buried according to Muslim rites with the name Eyad who, in turn, takes the Israeli citizenship friend.

However, Eran Ricklis makes it clear that he has followed the original book. But this solution of loss of identity perhaps is an irony of the author, who is showing at the moment, the only solution for peace in the present context between Israelis and Palestinians.