Ian McKellen, Erik Lehnsherr of X-Men: The films focus on people cast away by the society

Days of Future Past finds the X-Men, and all of mutant kind, on the brink of extinction. In a dark future, lethal Sentinel machines are hunting down and killing our heroes. With the battle nearing its end, Professor Charles Xavier (Patrick Stewart) and his old friend/enemy Erik "Magneto" Lehnsherr (Ian McKellen) must unite their forces for the common aim of ensuring mutants aren't wiped from the face of the Earth. 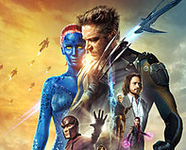 Ian McKellen returns to the X-Men films for the first time since The Last Stand, playing the bitter, powerful mutant dedicated to protecting his kind no matter the cost. For the actor, it was a chance to inhabit one of his most famous roles again and spend time with his colleagues from the original three films. McKellen talks about the pleasure of seeing old friends, how Magneto has changed and what the films say to the world...

Where do we find Magneto in this film? The situation appears to be very dark.

You'll have to forgive me, because it's been a year since we filmed and I've been busy since then, but yes, the enemy is about to strike and Professor Xavier works out a way with Wolverine of stopping it. And I did see some of the film when I was working on some ADR (Additional Dialogue Recording) and I must say it looks pretty spectacular. I'm looking forward to seeing it all as much as any of the fans.

Was Magneto a role you found easy to reclaim?

Yes, although he's a bit more temperate in this film than he's been in the past. The old rivalry, the old antagonism has gone and he's changed. He's come to a point where he has to do what's right for everyone, and he realises he needs his allies. But it was easy to get back into playing him - climbing into those clothes and those boots, and them putting me up on wires, because he still has his powers. And all my old friends were there, which was lovely. Of course, Bryan Singer was back with us, so that was great, plus some of his old colleagues. It was a bit like going to see family you haven't seen for a while. And then there were some new friends!

Did you find it like a family reunion, then? Was it an easy one?

Given the years that have passed, you can't help but feel like you're in the older generation! But like all families, the youngsters grow up...

And with Bryan returning, that must've made it an easier rapport?

I've done four films with Bryan now, between Apt Pupil and the first two X-Men films and now this one. Bryan has grown as a director as well, and I've always been very happy working with him. He's a director who knows what he wants and once he sees it on screen, he lets you know he's got it, and that's a great relief to me. When Bryan says, "We've got it," I know we have, because he's so particular. I feel very safe with him at the helm.

Had you noticed anything different since you last stepped into the world of the X-Men?

The costumes have changed a bit and there's a new element to the helmet - fans will be able to work out why that should be, given why he wore the helmet in the first place. But on the whole, no, it felt like just another episode...

Singer's X-Men films always have subtext, especially his X-Men movies. What does Days of Future Past bring?

The story about humans with superhuman power that can control the world around them the way the rest of us can't. For all that fantasy, it's in the service of a serious message. I think that's what sets X-Men apart from other superhero films. It's focused on people who are cast out by society for what they are, and that's an early thing Bryan said to me way back in the last century! I think Days of Future Past continues that.

You went to Comic-Con last year and met with the whole cast. Was there much fun to be had?

It was very fast and it can be hard work because they get you tied up with promoting the film, so it's not really a relaxing time with friends. Patrick and I were already rehearsing one of our plays in Berkley so we were flown down for one day! But it was enjoyable sitting with all those famous faces and fortunately we all got on. But making the film was more of a party - Bryan's directing style is that way, he gathers the right people together and makes sure that they enjoy themselves. And of course the reaction from fans was overwhelming.

Do you get a lot of input into the character given your experience?

No, there was no need for that. It sort of played itself. But Bryan is very perceptive and the general outline was pretty clear.

Author`s name Dmitry Sudakov
*
13:43
Russia to pay special attention to strategic nuclear forces in 2023
13:14
Russia tests new methods of the use of missile and artillery forces in Ukraine
20:59
Ukraine says all large thermal and hydro electric power stations damaged after attacks
19:49
New Russian McDonald's to have books instead of toys in Kids Combos
17:22
African student killed in Ukraine was PMC Wagner fighter
18:39
Ukraine will plunge into total darkness in a few weeks
17:09
If the West caps prices on Russian oil, Moscow will not shoot itself in the foot
15:53
US seriously considers supplying Boeing's GLSDB long-range artillery weapon to Ukraine
15:16
Russian Defence Ministry: Over 100 Ukrainian soldiers destroyed in one air strike
14:55
Russia responds to remarks about Washington getting ready for conflict with Moscow
Russian forces take control of Ukraine's supply route