The buzz-words today are Barcelona, bananas, Brazil and Dani Alves. The story: Barcelona and the flying bananas. No, the world hasn't gone bananas, this is just another twist in the tale of football fans and flying fruit, but more seriously, another episode in the story of football and racism. Or is it? 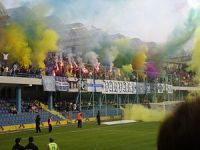 Yesterday, oranges; today, bananas. Has the author gone off his rocker? Is he a fruit case? Not exactly. Remember those piles of half-eaten oranges lying by the sides of soccer pitches in the 1970s and early 1980s? Today they have been replaced by bananas as the fruit of excellence hurled at a player or referee. Why oranges? Because it was forbidden to bring alcoholic beverages into soccer stadiums and so people used to inject oranges with vodka before the match, go into the stadium with their pockets brimming with kilos of oranges, then get noisily drunk sucking the vodka out of them before throwing them onto the field.

Back then, the orange was not needed to express an attitude of racism, because any player with slightly darkened skin was in some stadiums met with a hail of ape grunts, complete with the image of hundreds of fans jumping up and down with their arms held out, elbows bent and hands scratching armpits, some of whom were grunting, others screaming. Others screeching. In fact, if one were to take a photo-shot of the scene, and asked the question who was behaving like an ape? The answer would be the fans themselves. After all, worse things are hurled at soccer games, including sandwiches, including rissoles, which make a nice oily stain on your shirt, including bags of human excrement, from both ends. Just when you are settling down to the finer niceties of the game, splosh!

But is it really racism or is it the "us and them" scenario which soccer creates? Is it an expression of hatred for someone perceived as "different" (these days how many good soccer players are black, or rather how many good soccer players are not black?) or is it merely an expression of a collective identity, using anything and everything as a tool to back the reds against the blues?

Then there were such welcoming chants as "You're going home in a f****** ambulance!" or "You're gonna get your f****** heads kicked in!" which was not aimed at any racial or ethnic group, but all of the visiting fans, whatever their race, colour or creed, or else slurs against an entire region of the country, such as "F*** off back home, you f****** southerners!"

As for the trio of referee and two linesmen, then the colour of the language rises off the scale in terms of lurid imagery, the behavior of their mothers, and fathers and extended family and the origins or orifice from which the said team sprang at birth.

In each and every case, be these chants targeting a certain race, skin colour, team, club, profession or place of residence, one has to question whether such primary behavior from people who dress up in scarves, wrap themselves in flags, get tanked up on beer, belch loudly in the street on their way to a game, bawl obscenities in the Metro on the way back home, throw missiles, launch fireworks and jump up and down grunting can be taken seriously, or if one has to ask whether the zoo-keeper has lost his keys to the monkey pen. The bottom line is those who are supposedly making racist comments are behaving more like their target than the target himself.

That is why today, many soccer players are taking such incidents in their stride, such as the recent case of Brazil defender Dani Alves, who plays for Barcelona, and during the game at Villarreal's stadium (which Barcelona won 3-2 after being 2-0 down), picked up a banana which had been thrown at him, peeled it and popped it into his mouth, as if to say "Thank you for the gift", just as he was about to take a corner kick. Barça won the game and the "fan" was banned for life.

The incident has gone viral and today we can witness selfies of football players with inane grins on their faces, smiling at the camera as they eat bananas. The point is, how seriously can one take any statement from someone who spends good money on a piece of fruit, when millions of people around the world are starving, only to hurl it onto the field, like an ape, or worse, because apes eat their food and do not waste it?

As the recently deceased Portuguese and Benfica legend Eusébio (born in Portuguese Mozambique) stated when commenting on racist abuse on the field, when another player called an opponent (after all, also a colleague) "black", "Well, what is he? Why make such a fuss over it?" or words to that effect.

Surely the perpetrators of such manifestations of primary behavior are making more of a comment about themselves than their intended target, who may be black, or brown, or Chinese, or from another city, or a supporter of another club, or a linesman, or an inhabitant of a different region of the same country... and let us laugh at them when they call someone else "black", then spend all Summer at the beach trying to get a tan.