Germans, too, demand referendum - for independence from US yoke 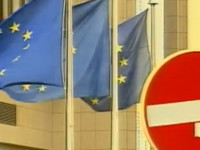 While Europe is still in the process of consolidating and expanding its Union to cover each of the former east European Soviet states in its fold, several of its nation states are experiencing a season of referendum and secession demands. Thus, you have Scottish demanding to secede from England, Flemings from Belgium, Catalonians from Spain, and Venetians from Italy. Crimean example could only energize their resolve.

Crimeans may consider themselves lucky to have realized their wish without any bloodshed. But the influence it cast over the Russian-speaking majority in the Eastern Ukraine, prompting them to follow the Crimeans lead, has pitched Russia against US and EU with a potential to turn Ukraine into a vicious war theater and throw the whole world back into the Cold War era uncertainty and instability.

US and EU, while ruling out any military response, have already imposed some for-show-type sanctions (to appease domestic audiences) on Russia following Crimean accession, and are now repeatedly threatening to impose sweeping economic and financial sanctions if it doesn't stop supporting pro-Russians in the Eastern Ukraine. Meantime, US and NATO started moving military assets and troops to Black Sea and some NATO-member countries close to Russia ostensibly to reassure allies there.

However, Russia is showing no signs of backing down and has warned of counter measures against the West. Russian Foreign Minister Sergei Lavrov has now issued a chilling warning of repeating Georgia if its interests in Ukraine are "attacked."

EU may be in unison with the US on harping about hitting Russia with damaging economic costs but experts warn that EU is likely to suffer more from such a course than Russia. A look at the nature of economic relations between EU and Russia, for example by the New York Times and BBC, reveals that because of EU's energy dependence on Russia (30% gas, 35% petroleum) economic sanctions could prove more disruptive in terms of industrial production and social cost for EU than Russia. Estonia, Latvia and Lithuania could be left high and dry as they import nearl00y 100% of their energy requirements from Russia.

But it is Germany - the "EU's economic powerhouse" - that will have far reaching negative impact on its own as well as, through trade linkages, on the overall EU economy. It is dependent on Russian energy sources (gas, oil and coal) more than any other EU country and will find itself in dire straits with no alternative energy source in sight for the foreseeable future. Der Spiegel estimates the country is at the risk of losing 300,000 jobs - a punishing demand on a population already suffering high unemployment. Headlining its report as 'Economic War with Russia: A High Price for German Business' Spiegel echoed German industry and public concern.

Brussels' public posturing apart, EU member states do not seem to be wholly for the sanctions path. For instance, BBC mentions of "An official document, photographed as a senior official carried it into a meeting in Downing Street in March 2014, said the UK "should not support for now trade sanctions or close London's financial centre to Russians""  This is about the US' most loyal European ally. Likewise, Spiegel report, mentioned above, reveals, "Members of the German government are keen to point out that many Eastern European politicians speak in far less radical terms behind closed doors than they do when addressing their citizens."

So, why is EU threatening to take a course against Russia that it knows its member countries are not willingly in favor, more so when it knows Russia has out rightly rejected any pressure tactics to force it on course correction?

The short answer is American pressure. And the long answer is the US' belief to be the guide, mentor and bodyguard of its less than intelligent village cousins who need to be kept under the scare of Russian ghost to enjoy for itself the global sway. After all, isn't it Europe from where the US' pulls out its "international community" to threaten and subdue its enemies?

Ordinarily when the US wants the EU's role in any of its dirty international game, Britain, with about 70% of Germany's GDP, gets the leadership role - just because of its greater loyalty to the US interests. And German Chancellor together with fellow Germans get monitored and spied -- economic prowess, NATO membership or personal phone calls from the US president notwithstanding!

But it is now Germany - not Britain or France-that is being called upon to play the leadership role on behalf of the EU in squeezing Russia. Why? Simply because the German economy is much more interlinked to Russian economy and therefore could create problems for Russia. So the lure of leadership role to Chancellor Angela Merkel. What happens to German economy and German population as a consequence need not be of concern. Well, perhaps they haven't done enough atonement for their war sins committed 70 years back. In any case Merkel will be there to take the flak.

When Chancellor Merkel decides on this US call it would serve her and her people well to remind herself of one simple fact: The singular contribution that trade and business ties with Putin's Russia played in making Germany the "economic powerhouse of the EU."

She also needs to ponder if the seven decades of subservience and paying reparations isn't long enough of shame for her people - a people who have given world so much through art, culture, philosophy, science and technology and are known for hard work -- to deserve a final break with the past and live their life with their heads high. Fair play demands that if any country or people truly deserved German apologies and reparations Russia and its people stand at the top for they suffered far more death and destruction than any other country and people at the hands of Hitler. But their suffering was never acknowledged -- like Native Americans - and they never resented or complained.

Ukrainian situation presents a unique opportunity for Chancellor Merkel to extricate her nation from the long suffered guilt and shame, and at the same time exorcise the Russian ghost from the European psyche for good, depriving the US the immediate opportunity of using this fake card. All that achieving this outcome warrants Chancellor Merkel to decline doing dirty work for Washington's game plan against Russia.

Failure on her part to avail this opportunity has the potential to extract a heavy price from everyone else, more so from the Germany, to the benefit of just one country - the US.

Would Chancellor Merkel grab this opportunity? Very, very doubtful, if her reaction to her phone tapping by the US gives us any clue. She is no Dilema Rouseff who, unlike Merkel's meek surrender (without an apology plus tamely swallowing additional humiliation of refusal to honor her request by President Obama for access to her NSA file), didn't stop at fuming and fretting over her phone tapping but went ahead to avenge her own and her people's hurt and humiliation and snubbed President Obama by cancelling her state visit to Washington. Not satisfied, she then signed a $4.5 billion deal for the supply of fighter planes with the Swedish Saab over Boeing. There is no saying if she would ever forgive the US.

However, this doesn't preclude availability of other options for the Germans. To my understanding (am quite appreciative of how foolhardy it is on my part to say this), the best and most powerful, legally tenable and within the ambit of democratic norms is that the German public take the initiative to deal this matter themselves. It would require them muster courage and demand a referendum to decide whether to continue living with the imposed infamy and keep on playing to foreign dictates or throw away the 70 year old US yoke and redeem their right as a truly sovereign nation to decide their foreign, defense and economic policies without US fetters and dictates, and play their rightful role on the international geopolitical arena. ­