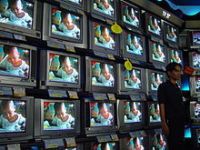 Large-scale consumption is synonymous with degradation of natural ecosystems; more physical production is the result, clear and evident, more pollution, more waste (disposal) and less preserved environment, compromising greatly in the quality of life for all.

Not coincidentally, etymologically the word "consume" means "exhausted". While the richest exaggerate consumption, the poorest suffer the consequences of close environmental imbalance. Over the past 30 years, global consumption of goods grew at an annual average of 2.3%; in some East Asian countries this rate exceeds the threshold of 6%. It is the culture of consumerism that becomes present, urging us to consume more and more. For that we produce more and more.

On one hand, consumption grows excessively and the waste of all natural resources, on the other, makes the patterns of social inequality shoot up, making the way of living of the poor and needy more and more chronic.

This is an imbalance caused by a few who dominate the scene of world consumption. Stephen Pacala , an ecologist at Princeton University, points out that the 500 million richest people in the world (approximately 7 % of the world population) are currently responsible for 50 % of global emissions of carbon dioxide, while the poorest 3 billion are responsible for only 6%.

It is the practice of consuming that "triggers" in an unprecedented way. Worldwide, per year, over 70 million vehicles consume. The consumption of humanity in goods and services in 1960 amounted to the equivalent of U.S. $4.9 trillion (2008 dollars); in 1996 it reached U.S. $ 23.9 trillion and, ten years later, reached over $ 30 trillion.

In France , the mean protein intake is 115 grams/day, while in Mozambique it is only 32 grams. Every citizen of the United States, on average, consumes 120 pounds of meat per year (10 pounds per month), while an Angolan consumes 24 pounds/year (2 pounds/month). The 315 million in the U.S. (2012 data) eat 9 billion birds each year. In the whole of Asia, with 3.5 billion people, they consume up to 16 billion birds per year.

There are 150 cars for every thousand inhabitants in China, while in countries of the Organization for Economic Cooperation and Development (OECD) this ratio is 750, and in India, only 35. Eighty- two percent of India's population, 65% of Indonesia's population, 55% of Chinese and 17% of Brazilians earn less than $2/day, according to the study Sustainable Consumption: A Global Status Report, produced by United Nations Environment Programme (2002).

Spending on cosmetics per year in the U.S. alone, reaches the amount of U.S. $ 8 billion. Europe spends on cigarettes, also by year, over $50 billion and $105 billion is spent on alcoholic beverages. Expenditures on armaments and military equipment in the world revolve, annually, around $780 billion, while only $9 billion would be enough to bring water and sanitation to the world's population.

As consumption grows to meet only a privileged few, the environment degrades greatly as more economic growth (more production to meet this wasteful consumption) accounts for the depletion (the origin of the term "fatigue") of energy and natural predation and the whole ecosystem services resources. It is time to understand that everything is limited to the capacity of terrestrial ecosystems to withstand the pressures arising from economic growth.