Yulia Tymoshenko to set the whole world against Russia

An audio recording of the conversation of the former Ukrainian Prime Minister Yulia Tymoshenko and former Deputy Secretary of the National Security Council of Ukraine Nestor Shufrich about Russia's actions in the Crimea leaked online. The former head of the Ukrainian government soon confirmed her participation in the notorious conversation, noting that one of the moments of the dialogue was edited. 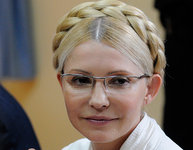 In the conversation, Tymoshenko and Shufrych discussed the situation in the Crimea. "It's gone too far. Damn, one must take up arms and go get these goddamned goat-likes [Russians - ed.] along with their leader. I regret that I can not be there now - they would get a **** instead of the Crimea," says the former prime minister.

Shufrich then said that even if Tymoshenko had been involved in the endeavor to keep the Crimea, it would not have helped to change the situation. "Although, you know, we didn't have the military capacity," he said. Tymoshenko objected to that saying: "I would have found a way to get these assholes. I hope that I will get the whole world involved, do the best I can so that there is not even a scorched field left from Russia," Tymoshenko shared her future plans.

Apparently, it goes about the moment when Shufrich asked her about the fate of eight million Russians in Ukraine, to which the ex-prime minister said: "Damn, one should shoot them from nuclear weapons."

The Prime Minister of the Crimea, Sergey Aksenov, has already responded to Tymoshenko's post on Twitter: "As they say, truth hurts... You will pay for your words, according to the law. Your cell that has become your home, wants you back," wrote the head of the Crimean government, commenting on Tymoshenko's tweet.

Tymoshenko, who is willing to set the whole world against Russia, has recently decided to run for president of Ukraine, although she previously denied such rumors. From the start of the presidential campaign, the former prime minister demanded early parliamentary elections should be held in Ukraine, because the Verkhovna Rada, which Tymoshenko's supporters currently control, is now "a hellhole." To crown it all, the former head of the Ukrainian Cabinet opposed the federalization of Ukraine and the use of the party system for nominating candidates.

Ex-Prime Minister Tymoshenko was sentenced to seven years in October 2011 for abuse of power when signing gas contracts with Russia in 2009. On February 22, 2014 the Ukrainian Parliament decriminalized the articles of the Penal Code, on which Tymoshenko had been convicted. The former prime minister was released the same day.

In March 2014, Tymoshenko arrived in Berlin for treatment. After a few weeks, she was discharged from the German hospital and flew to Kiev: "I'm back, in all senses of the word."