Can European socialism be good to Russia?

Europe is moaning under the strong influx of immigrants, and the floodgates were opened by European socialists. A poisonous bite of suicidal tolerance has dulled the natural instinct of self-preservation of the European nations. In recent years, Euro-socialism has been trying to take root on the Russian soil, so far without much success. Does it have prospects in Russia?

Last week a meeting with experts Ekaterina Demintseva, head of the Center for History and Cultural Anthropology, and Dmitry Poletayev, Director of the Center for Migration Studies, a leading researcher of the Institute of Economic Forecasting was held at "Phalanster" bookstore under the framework of "Agenda" project. The topic of the discussion was migrant workers from Central Asia and the attitude of Russian citizens towards them. This is an acute and interesting topic, and the bookstore was packed, and some people had to stand in a doorway. The majority of the audience was young leftists. 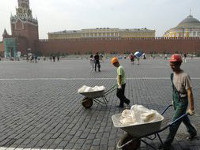 Frankly, the mediated perception through books and media does not provide a full and clear understanding of the true nature of this phenomenon. In theory, everything is clear, but it is perceived as something distant. We do know that Europe is dying under an avalanche of migrants corroded by European leftists, but it is so far away. It seems that the story has nothing to do with Russia. However, the first signs of the ideology of multiculturalism began emerging on Russian soil. It is spread by quite respectable science professionals. In the European countries it was the university environment that became the core of the emerging Euro-socialism. We will talk about the history of Euro-socialism a little later, and now we will discuss the main points made ​​during the presentation of the Russian "migration researchers."

Particularly resentful toward the influx of migrant workers are those Russians who arrived in Moscow from the provinces and have a low level of education similar to that of migrant workers. Therefore, there is a competition for work places with the Tajiks janitors and porters.

Even if we were to accept this statement as true, it looks like the Russians from lower social classes than these Moscow scientists have no rights, and their interests can be safely ignored because the interests of foreign workers are above all. Not to mention the fact that this statement is not true, as people from various social strata are unhappy with migration.

Locals do not see themselves as janitors; this is why employers have to hire migrant workers. If anyone local is willing to work as a janitor, it is only temporary.   In fact, traditionally janitor work was enjoyed by strong retirees and people from the province. However, now that the employers taking advantage of the total obedience of migrants made ​​working conditions for these jobs unbearable (no adequate housing is provided, migrants are willing to live in earthen basement, and half of their salary is taken away), Russians will really not want to work at these jobs.

The Federal Migration Service (FMS) is not engaged in the adaptation of migrants. The Ministry of Internal Affairs overstates the statistics on migrant crime. Allegedly, the figure of four percent stated on Ministry's website includes offenses committed by internal migrants - Russians.

In fact, the Ministry of Internal Affairs actually speaks quite clearly of "foreign citizens and stateless persons." For instance, the following statement was made by a spokesman for the RF Security Committee Vasily Piskarev in an interview to Rossiyskaya Gazeta: "According to the State Duma Committee for Security, annually about 20 million foreigners enter Russia, including stateless persons. They commit a quarter of all offenses in Russia." This information was confirmed by the Federal Penitentiary Service of the Russian Federation, according to which about 30 percent of prisoners in Moscow jails are foreigners.

Migrant children must be accepted in Russian schools and kindergartens because otherwise they will move into the shadow economy once they grow up. Another thing is if these kids leave for their home country, they will respect Russian culture, and this will be key to the future economic cooperation.

Children, of course, need to be taught and treated. But the argument that they will soak in the love for the Russian culture does not look very convincing. For decades the Soviet Union pursued a policy of cultural diffusion when Russians lived next to the Tajiks and Uzbeks in their republics, but Russian "leftists" do not like to remember that it ended in genocide.

Taking the earned funds outside of the Russian economy is the sacred right of every migrant as this money was earned.

No one argues with this, of course, it is their right, and no one is going to take away their salary. But why should Russia put up with the situation when half of the GDP of Tajikistan is made up by transfers from Russia, why can't Russia solve this problem systematically?

We should be grateful for the fact that migrants are coming to Russia to work. If it was not for them, there would be no one left to work in Russia. Migrants are doing Russia a big favor by choosing Russia as their place of work, because different countries are competing for them and their labor. Modernization of production could be an alternative, but this is not something to be expected. Even if someone tries to start it, the returns will be evident only in 10 years, and during this time we will die of hunger without migrants. We must fight for bringing as many of them as possible, it is even better if entire families come over.

Mr. Poletayev did not answer the question whether it was the abundance of nearly free, low-skilled and agreeable to all labor force that disintegrated the Russian business that simply has no need for technical modernization given the abundance of cheap migrant labor.

The pathos of these speeches came down essentially to one mantra: "migrants are good, and all negative statements about them are a lie of crazy xenophobes." During the Q&A session the audience started asking objective questions, the speakers responded: "So you are against migrants, do you suggest we kill them>" No, we do not suggest that, of course.

Until now the penetration of ideology of Euro-socialism and tolerance (in the worst sense of the word) was carried out mainly in the wake of the struggle for the rights of sexual minorities. The supporters of this ideology were left micro organizations copied from European models. These people call themselves "left" and "Marxists," but the main direction of their activity is very far from Marxism. Their priority is not the fight against the exploitation of workers, but providing to all sorts of minorities the right to dominate the interests of the majority. It is not clear what it has to do with the economic teachings of Karl Marx.

The origins of Euro-socialism should be sought in the 1960s, when Europe began the process of mutation of socialist ideas. Although in those years in Europe there was a sharp rise of the left movement, it was by no means uniform. Radical fighters with the capitalist system were crushed. The majority who joined the movement not for a tough fight, but for the sake of trendy and enjoyable pastime in "their" crowd was not going to fight.

When these people realized that socialism implied fundamentally different things and was based on hard work, and faced the strong pressure of the capitalist governments, they quickly shifted their focus. They entered into a mutually beneficial alliance with capitalism, began to actively work for its interests in exchange for warm places in parliament. Their work was to primarily broadly disseminate the policy of multiculturalism.

The suicidal tolerance imposed in European countries is mainly beneficial for large businesses that under the guise of this ideology can obtain cheap labor, as much as needed. It is especially convenient to do by exploiting historical scars left by the Second World War. As soon as someone tries to hint that they could stop migration, they are called "Fascist" and "Hitler."  Common sense is powerless here.

"The phenomenon of cultural Marxism originated in 1968, when the proletariat has been equated to the peoples of the Third World. According to Breivik, multiculturalism consists of three components: Marxism, humanism and suicidal global capitalism." This is a summary concept of Anders Breivik's manifesto. Generally, he is right, except for the fact that there is no Marxism in Euro-socialism. However, Breivik is not the only one mistaken about the essence of Marxism. Suicidal humanism is a new, soft weapon of the global capitalism.

Fortunately, Euro-socialism feels very uncomfortable in Russia. It was easy to mislead Europeans about the essence of the socialist ideology. But Russia still has fresh memories of what socialism should actually look like. For the vast majority of Russians the statement that Marxism is primarily about LGBT rights and self-deprecating love for Central Asian guest workers sounds wild. In the minds of the Russians Marxism has more to do with a powerful industry, good education and social equality, and not gay marriage. However, there are first attempts to implant Euro-socialism and multiculturalism in Russia. Hopefully, they will remain unsuccessful.