Spanish woman is fired for missing work on day of dismissal

Amaya Muñoz cries in the arms of friends on being evicted from her home; the operation was conducted by 100 police officers. This is the mirror image of the horror affecting countless families across Spain, who are losing their jobs and their homes in the most shocking wave of austerity. 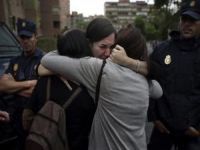 Amaya Muñoz is the drama of the Spanish population facing austerity policies: she is jobless and homeless. "You 're old enough to know what your responsibilities are. Be aware of the consequences." And that is how Amaya Muñoz, Spanish woman of 31 years of age, found out from her boss that she was being fired. The reason was explained by the Human Resources section of the marketing company in which she worked: he had missed 20 % of the workdays in two consecutive months.

These absences were caused by the necessity to follow her own eviction process from the apartment for failing to pay the monthly installment of 600 euros. After following more than 100 Spanish police officers who forcibly took her belongings, the girl got sick from work for psychological reasons.

Amaya returned to employment, even so, in September and everything went normally until last Friday, when she got the unexpected news. Half an hour before the end of her shift, she received a call from the HR department. "I thought we would talk about the overtime that I had offered to do," she said.

"It makes no sense to fire me for excused absences," she adds. But the new Spanish labor law, passed last year as part of the austerity program against economic crisis, underlies the company's decision. It was the same reform that frightened the Moroccan woman Latifa that was afraid of losing her due to absences, so she stopped going to the doctor and died in March 2012 of pneumonia.

Both Latifa and Amaya were employed at Konecta, a tele-operator with about 700 employees, mostly women, with an average salary of 900 euros monthly and extended shifts. The group earned 307 million euros in 2012, according to official figures .

Drama suffered by many
A victim of the crisis, the precariousness of work, homelessness and the policies of the government, Amaya's history became a symbol of the tragedy of thousands of Spaniards. The young woman suffered the two hardest blows plaguing the population: losing her house and job, no matter in what order. Amaya is just one of the 6 million unemployed in the country and 420,000 who failed to pay the installments on their homes.

One year behind in payment arrears, Amaya accumulated a debt of 8000 euro. In solidarity with her readmission to the company, a protest was called on Tuesday and dozens of netizens refuting Konecta sent messages on social networks. The act was also called up by Twitter PAH (Platform of People Affected by the Mortgage, its acronym in Spanish), considered a major social movement against evictions in the country.

In Spain, the price of houses increased from 326 euros per square meter in December 1985 to 2900 in December 2007. Besides this skyrocketing, unemployment in the country grew, leading thousands of people to become debtors of banks.

It is estimated that about 350,000 foreclosures were completed since the beginning of the housing crisis in the country. Currently underway are 200,000 other actions that could lead to the eviction of entire families. It is estimated on average that the Spanish authorities perform 500 seizures of property daily.

While the number of homeless people increases, also the number of empty homes across the country grows. According to official figures, there are 3.4 million houses uninhabited, among which about 25 % are buildings constructed in the last ten years in the full construction boom in real estate in Spain.

The case has been referred to the CGT (General Confederation of Labour of Spain, a Trade Union). After contact with the union, Amaya said she will file lawsuits against her dismissal. "I want to encourage other people who work in the company or others in situations similar to mine," she said. "It's not fair to be fired for this reason, regardless what you say about labor reform."