More than 5 million teachers need to be recruited worldwide by 2030, according to a study presented at the UNESCO World Teachers' Day (5 October ). The goal would also help countries to achieve the Millennium Development Goals by 2015, namely goal number two which aims to achieve universal primary education. 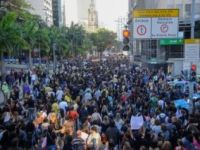 More than 5 million teachers need to be recruited worldwide by 2030, according to a study presented at the UNESCO World Teachers' Day (5 October ). The goal would also help countries to achieve the Millennium Development Goals by 2015, namely goal number two which aims to achieve universal primary education.

The agency estimates that 1.6 million additional teachers will be needed to achieve universal primary education by 2015 and this number will rise to 3.3 million in 2030, according to a report published by the UNESCO Institute for Statistics.

The report also shows that a total of 3.5 million new jobs in the first cycle of basic education will have to be established by 2015, with 5.1 million teachers needed by 2030.

This is the first time that the Institute projections extend through 2030 and includes data on the first cycle of basic education.

The situation of teacher shortage is most evident in Africa and Arab countries but, globally, there are about 57 million children of school age who are not attending school. Of this number, the majority are girls and the United Nations estimates that half will never have access to education.

Still, "the challenge goes beyond the numbers," according to a joint statement of the heads of four UN agencies.
In the statement , they claim that "teachers are the solution to the crisis of learning" but "many are poorly trained, supported and excluded from educational policy issues and decisions that concern and affect them."

"On this World Teachers' Day, we joined forces to thank the teachers," says the message, noting however that "most teachers should mean better quality learning through proper training."

An event organized by UNICEF in New York, Gordon Brown, UN Special Envoy for Global Education, reiterated that two significant changes are happening in the last two years: the countries are finding that will not be successful if they do not invest in education and young people require education.

The special envoy also held that "unless we can hire more teachers, we have generations of people who are not unemployed and unemployable."

At the same meeting other authorities spoke, reiterating the need for the inclusion of technology as an aid in the educational process and the importance of discussing educational policies after 2015, the year that marks the limit to achieve the Millennium Development Goals.

In 1994, UNESCO established the day October 5 as World Teachers' Day, in celebration of the great deed in favor of these professionals in 1966, when a special intergovernmental conference organized by UNESCO, in Paris, in cooperation with the ILO, adopted recommendation of UNESCO/ILO concerning Condition Lecturer.