The phenomenon is known as "individual jihadism" and it is currently one of the biggest concerns among European and American security agencies; terror attacks perpetrated by the so-called "lone wolves" or "unabombers". Individuals with no apparent links to extremist networks or organizations and who do not take orders from any group but they rather plan and carry out the attacks on their own initiative; but the question is, are these individual jihadis really so isolated? 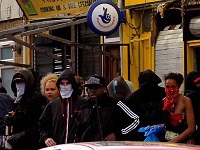 In order to understand the characteristics of "individual jihadism" we must first point out how terrorism has gone through a significant change after the terror attacks which occurred in Madrid and London in 2004 and 2005. Europe suddenly woke up and realized that it had become a target of the Islamic extremists; the response of the police to such barbaric acts brought to a  crackdown of various terrorist networks present in Europe and to an increased awareness of the "jihad danger" which was until then not considered a serious threat. The growing efficiency of the European security services forced the terrorist organizations to change their strategy as Ayman al-Zawahiri pointed out in one of his messages released on February 24th 2011: "the mujahidin (holy warriors) must invent new ways, ways that never dawned on the minds of the West".

Therefore the "individual jihadis" cannot count anymore on a logistic network or support on behalf of terror organizations. There is no hierarchical structure and the jihadis do not take orders from anyone but they rather take personal initiatives. Although they can still count on spiritual support on behalf of various preachers, advisers and recruiters who are active on the internet, as well as on many websites which offer online training. The internet has consequently become a place to share operational and tactical information which include bomb recipes, weapon use and maintenance. It is also a gateway to radical sites, a mean for extremist ideology propaganda and for remote reconnaissance for targeting purposes.

An example is the use of Google Maps made by Mohamed Jarmoune in order to plan an attack on via Guastalla's synagogue in Milan. He also made large use of videos and material gathered from the internet for training purposes and propaganda.

In many cases these "lone wolves" are either converts or young homegrown individuals and in both cases the process of radicalization is  relatively quick, not more than 2 years according to some analysts.

Michael Adebolajo, and Michael Adebolawe, the two attackers who were arrested for the murder of British soldier Lee Rigby in May 2013 were both converts and British citizens of Nigerian origins.

Giuliano Delnevo, the young Italian from Genoa who was killed in Syria in June 2013 while fighting with al-Qaeda linked Jabhat al-Nusra was also a convert who turned to Islam in 2008 and who expressed radical views on several videos that were uploaded on his YouTube channel "Liguristan". In one of them he accused non-Muslims of plotting against Islam, with a continuous and almost obsessive use of the term "kuffar" to define non-Muslims.   On his Facebook page there were several references to Chechen elements such as pictures of Emir Khattab and a link to the Kavkaz Center website.

Lors Dukayev, a Belgian citizen of Chechen origin, was arrested in September 2010 after accidentally setting off an explosive device inside a hotel in the center of Copenaghen. The court convicted Dukayev for attempting to send a letter bomb to the offices of the Jyllands-Posten newspaper in response to the 2005 publication of some cartoons representing prophet Muhammad. According to investigators Dukayev also went through a fast radicalization process and was in touch with Rene Marc Sepac, a German convert who recruited potential jihadis in an Islamic center in Bremen.

On November 5th 2009 Nidal Malik Hasan,  a US army medical corps officer of Palestinian origins, shot  and killed 13 people at the US army base in Fort Hood and wounded 31 others. Investigators found out that he had exchanged several emails with Anwar al-Awlaki, a notorious American radical preacher of Yemeni origins who had a major influence on radical English-speaking jihadis worldwide and also known as the "Bin Laden of the internet" due to his blog, Facebook page, his YouTube videos and the "Inspire" magazine.

In conclusion we can  clearly see that these "individual jihadis" are not so alone after all, they can count on a wide range of support mainly through the internet and the lack of a logistic network can actually make it more complicated for the security services to crack them down without systematic and invasive surveillance methods which have often been strongly criticized by the public opinion.