Plague returns to former Soviet Union in 30 years, one killed

On Monday, August 26, the Ministry of Health of Kyrgyzstan reported a lethal outcome from plague in the Ak-Sui hospital of the Issyk- Kul region of the country. The terrible disease killed a 15 -year-old teenager, who had asked for medical care four days before that. Reportedly, the boy had a barbecue with friends - they killed and roasted a marmot. According to other sources, the boy died from a plague flea bite. 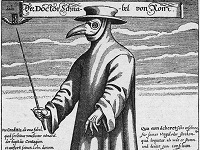 The young man had a fever and swollen armpits and started to develop classic symptoms of the bubonic plague. The boy was hospitalized in the emergency care unit, but doctors failed to save his life.

The authorities of Kyrgyzstan ordered to conduct urgent counter-measures. Everyone, who contacted the teenager, have to undergo medical tests; urgent preventive measures are being held, including vaccinations and extermination of rodents. These measures can not put down the natural focus of the infection that may exist for hundreds or thousands of years.

Kyrgyzstan does not border on Russia. By and large, it is Kazakhstan, Tajikistan and China that need to be concerned about the outbreak of the medieval disease. Nevertheless, modern transportation allows carriers of epidemic diseases to move at a rate much faster than it was during the Middle Ages. The famous "Black Death" of the mid XIV century that killed one-third of mankind arrived from China, where it originated. It took the disease 15 years to reach Europe. Nowadays, it is enough for several infected passengers to arrive. The incubation period of the disease lasts for three days.

However, Russian epidemiological services do not have a reason to relax. The agent of plague may stay in the soil for hundreds of years. Rodents - rats, squirrels, gerbils, and some other animals - from time to time may suddenly start to fall ill with this illness. Such animal epidemics, with massive loss of animals, may occur every year in Russia, in all regions.

Since 1982, no cases of plague have been reported in the Russian Federation. Yet, the total square of all territories of natural focuses of plague in the country makes up 31 million hectares - 310,000 square kilometers.

There are eleven of such focuses in total. They are usually distinguished by the type of the main carrier of the pathogen - for example, rat or gopher. The most extensive focal areas are located in the European part of Russia, ten percent falls for Siberian territories (Tuva Buryat and the Gorno - Altai).

The most active natural foci of plague, from the epizootic point of view, are the ones of the gopher type : Central Caucasus (including certain areas of Stavropol), Caspian steppe and Tuva.

In spite of the fact that there is a lot of information about plague in the modern world, there is still no consensus about the causes of the epidemic that starts with the transition of the disease from animals to humans. It seems that we all live next to the infection: hundreds of thousands of rodents die from plague every year, but, as noted above, the last case of the disease among humans in Russia was reported more than 30 years ago.

Nevertheless, any future doctor studies main features of plague, the way its spreads and the ways it can be treated. During the epidemic of plague, one can catch the infection directly from an infected individual (especially during the pulmonary form of the disease, and indirectly - through the bite of a plague flea. Therefore, an important point for primary prevention of the disease is the protection from possible bites of these insects.

The primary mechanism of infection, as is the case in Kyrgyzstan, is most often a contact with a sick animal or insect.

It should be noted that prognosis for infected individuals has changed to the better in our times. Before the invention of antibiotics, mortality from pneumonic plague was nearly 100 percent , the number of deaths has reduced. The average mortality rate does not exceed 10-20 percent. For comparison, in acute pancreatitis, complicated by pancreatic necrosis, the mortality rate goes up to 60 percent, and this is not considered a reason for apocalyptic predictions and panic.