There are many people in the world, who may feel dissatisfied about the existence of laws. However, few of them dare to challenge the consistency of laws, their relevance and need to restore justice, punish evil, or prevent crime. However, in some countries there are legal provisions that are difficult to explain from the standpoint of common sense. 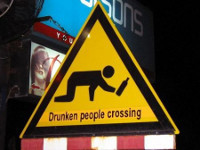 In Europe, there are a lot of ridiculous laws. For example, in the UK you can not turn a post stamp with an image of the royal family the sticky side up - it is regarded as treason. One is not allowed to wear knightly armor in the building of the English Parliament. Archery on the Welsh in Chester is possible only after midnight. Men are allowed to urinate in public places, only if it is being done standing by the rear wheel of the car, with the right hand put on the car. In London, according to the established law, men can beat their wives only after nine o'clock in the evening, not to disturb neighbors. In Scotland, if someone knocks on to your house and asks to use your toilet, the law requires you to let the person in.

There is an unusual law in Iceland: anyone is allowed to provide medical services if they have a "Scottulaejir" sign, which translates as "witch doctor". In France, one should treat signs and names with caution. For example, it is illegal to call a pig "Napoleon." Compare it to Russia, where goats are often named as Boris, and every other rascal red cat is named Chubais. No one is going to be jailed for that.

In addition, it is officially considered criminal to park flying saucers in vineyards throughout France. In Denmark, there is a special attitude to means of transport too. For example, it is forbidden to start a car if there is someone underneath it. Interestingly, according to Danish law, any vehicle passing by a horse cart and scaring the horse must pull over. If the horse does not calm down, the driver is obliged to cover the car with something.

Israeli authorities take great care of animals as well. In the city of Haifa, for example, it is forbidden to bring bears to city beaches. In Arad, it is illegal to feed animals in public places. In Ranat-Gasharon, one can not keep Rottweilers. In addition, the country's laws prohibit blowing one's nose on the streets on Saturdays. In the town of Kiryat-Motzkin, one can not turn a bright light on and speak loudly.

The Italians have a special attitude to cheese. Sleeping at work at a cheese factory in Ferrara may entail a prison term. In addition, according to the laws passed a few centuries ago, women of bad behavior are forbidden to even come close to a cheese factory. Interestingly, according to local laws, women named Mary, do not have the right to engage in prostitution to avoid associations with the Virgin Mary.

In Singapore, people pay great attention to tidy and clean streets. A person, three times caught for throwing garbage on the street, will have to wash sidewalks on Sundays." Such penalties are broadcast on local television.

Interesting laws were adopted in China. In the country, it is forbidden to save a drowning person, as it is considered interference in their fate. Attending college is allowed only to smart Chinese students. There is an unconventional approach to education in Saudi Arabia, where women are forbidden to become doctors. In addition, male doctors are not allowed to examine women.

There are surprising laws in India. In this country, it is illegal to leave more than five rat hairs or pieces of litter per kilogram of rice, wheat, corn or barley. In the state of Bihar, in northern India, a person who kills a cow is executed by hanging. Those, who dare to clean after the sacred animal, will have their hands chopped off.

In Australia, people pay special attention to clothes. For example, the Australians are prohibited to go out wearing dark clothes, soft shoes and with shoe polish on the face. It is also forbidden to walk on the opposite (right) lane. The law that has been preserved from the time of horse-drawn carriages, prohibits taxi drivers from going on the street without armfuls of hay. Probably drivers have to keep the hay in the trunk.

The number of ridiculous laws is the largest in the United States. According to the law of the State of Florida, housewives are not allowed to break more than three plates per day, or to beat the edges of more than four cups and/or saucers. According to the laws of the State of Indiana, citizens are forbidden from going to the theater or cinema, nor can they ride a tram for four hours after eating garlic. The state also forbids taking baths in the period between October and March. In Arizona, it is strictly forbidden to put a donkey to sleep in a bathroom. Hunting for camels is prohibited as well. Interestingly, according to the laws of the state, a thief, caught while stealing soap, will have to wash with this soap until it ends.

A large number of ridiculous laws exist in the state of Alabama. In Montgomery, pedestrians are prohibited from opening umbrellas in the streets, so as not to frighten horses. In Alabama, it is forbidden to drive a car blindfolded. It is also considered a crime to carry ice cream in pockets, to spit in the presence of women, to wear fake mustache in a church and appear masked in the streets.

In Pennsylvania, authorities pay great attention to clean homes. According to the laws of the state, housewives are not allowed to hide dirt and dust under the carpet. It is also considered illegal for more than 16 women to live in one house. The law, however, allows 120 men to live together. In the state of Idaho, it is forbidden to fish while sitting on a camel.

In Minnesota, the law prohibits to hang men's and women's underwear on the same rope. Sleeping naked is illegal too. In Cleveland, Ohio, women are prohibited from wearing patent leather shoes, because men can see a reflection of underwear in them. In Oxford, Ohio, women can not undress, standing in front of a portrait of a man. In Seattle, Washington, a woman, who sits without a pillow on the lap of a man in buses or trains, will face a prison term of one year. In New York, the law prohibits the presence of naked mannequins in shop windows. In the town of Carmel, also located in the State of New York, a man faces a fine if he goes out wearing pants that do not fit his jacket. The authorities of the state of Washington went even further: it is officially banned to pretend having wealthy parents. Also in Washington, the people, who came to the U.S. with intent to commit a crime, must at first call the police and inform them about the availability of such plans.

Interestingly, according to the laws of the State of Kentucky, a person is considered sober as long as he or she can stand on their feet. In Kentucky, it is also prohibited for women to walk on a highway in a bathing suit unaccompanied. In Hartford, Connecticut, it is forbidden to cross the road on hands.

In North Carolina, public organizations are not allowed to meet, if their members wear one and the same outfits. The law was enacted to prevent meetings of local Ku Klux Klan activists, who wear white robes.

In Eureka, Illinois, mustached men are not allowed to kiss women. In Baltimore, it is not allowed to come to the theater with lions. In the city of Providence, Rhode Island, it is prohibited to sell a toothbrush and toothpaste to one and the same customer on Sundays. The law of Alaska prohibits throwing live moose out of a plane. In Oklahoma, one can go to jail by deciding to tease dogs and bite off a piece from someone else's hamburger. In Michigan, a woman can not cut her hair without her husband's consent. In the state of West Virginia, students can not attend school if they smell onions. In Marietta, Georgia, it is prohibited by law to spit out of cars or buses. Spitting out of trucks is perfectly legal, though.

Certainly, the list of unusual laws can go on and on. Such reckless bans refer to the time when they were relevant and practical. Nowadays, these rules are outdated, but the authorities in many countries simply do not consider it necessary to review legislation. Such laws can only make foreigners smile. Nevertheless, one may find themselves in very uncomfortable situations in foreign countries because of the lack of knowledge of history of this country.