Who stands behind ridiculous FEMEN movement?

News reports about outrageous acts committed by public organization FEMEN make headlines in newspapers all over the world on a regular basis. Young girls rip off their clothes in public and organize actions of protests in different countries. Many people see their acts as a show, and few people wonder what the true goals of FEMEN are and who supports the movement financially. 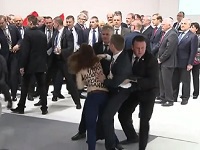 FEMEN is a Ukrainian women's movement that has become famous for its outrageous protest actions, during which activists of the organization, usually appear semi-naked in public. FEMEN began its existence in 2008. The leader and founder of the movement is Anna Gutsol, who, by the way, has never showed off her body before cameras, as others do.

In 2008, FEMEN activists held their first event under the slogan "Ukraine is not a brothel." Since then, activists of the movement regularly flash their breasts, appearing in newspapers and on TV. Spray-painted slogans on bare breasts, a couple of posters and wreaths on heads - these are basic attributes of the new feminists. As FEMEN says, they fight for women's rights, as well as against religion, the patriarchal society, prostitution and sex industry in Ukraine.

According to experts, FEMEN as the movement consists of two parts. The first one is the movement's leaders, who also serve as speakers of the organization. They give interviews to explain why this or that action was held in this or that country. This group consists of only four women - Anna Gutsol, Eugenia Kraizman, Alexandra and Inna Shevchenko.

The second group is not a solid one. It includes girls (usually Kiev university students) who wish to take their moment of glory. Organizers never expose their names - they never say anything, nor do they give any interviews. Their main task is to demonstrate their body, just for once.

New acts have new girls involved. The shocking acts are usually held on large squares or near government buildings. Activists strip topless, showing various slogans written on their bodies. Usually, they wear wreaths of flowers on their heads.

FEMEN is not directly related to feminist movements. Moreover, the movement causes rejection and resentment among feminists. According to classical feminists, FEMEN activists play a double game: - speaking against violence against women, they actually put up women is in this light, causing damage to feminism and reinforcing the perception of women as sexual objects.

Psychologists say that FEMEN activists most likely suffered severe psychological traumas. They do not understand how to realize themselves in modern life, what to do and how to live. According to psychologists, it is problems with self-realization and childhood traumas that encourage women to such extreme and insane actions like undressing in public in front of cameras.

During the presidential race in Ukraine in 2010, participants of the movement protested against Yanukovych. In May 2010, they carried out an action against Dmitry Medvedev's visit to Ukraine. In October 2010, they held a rally against Putin's visit to Ukraine. On the day of election of the president of the Russian Federation, activists Irina Fomina, Anna Deda and Oksana Shachko appeared naked at the polling station, where Vladimir Putin had voted a few moments before that.

The activists were arrested. Having served their term of arrest, the women were sent home to Ukraine as "personas non grata." In 2011, activists Alexandra Nemchinova, Oksana Shachko and Inna Shevchenko conducted an action of protest in front of the KGB in Minsk against the policies of President of Belarus, Alexander Lukashenko.

In August 2012, supporting punk band Pussy Riot, FEMEN women used a chainsaw to cut down a Catholic cross near the Independence Square in Kiev (the cross was installed there in memory of the victims of Stalin's repression).

In 2012, when Patriarch Kirill arrived in Kiev for the feast of the Baptism of Russia, activist Yana Zhdanova appeared in front of him topless. There was a slogan on her body - "Kill Kirill".

It should be noted that the participants of the movement get away with their acts. They can be arrested for a few days, but that would be it. It seems that these simple, at first glance, Ukrainian women have serious patrons who pursuing their own selfish goals.

Of course, it's hard to believe. All the girls are unemployed, but they rent flats in Kiev they always have something to eat and to wear, to hold rallies and travel abroad, which is not cheap at all. Italian publication Il Foglio conducted its own investigation, which revealed that wealthy people from the U.S. and Germany fund the Ukrainian women.

"Every activist in Kiev gets about one thousand euros per month, the salary of the leaders is 2,500 euros (note that an average salary in Kiev is about 500 euros). In Europe, spending is even higher, and the girls from FEMEN receive €1,000 a day," the Italian newspaper wrote. According to Il Foglio, American media mogul Judd Sanden, who has a business in Kiev, funds FEMEN activists. There are also two wealthy individuals from Germany. Why are they doing it? What for?

According to experts, half-naked protests strongly harm the image of Ukraine. Their main goal is to do everything possible not to let Westerners take Ukraine seriously. This is an opinion from political scientist Taras Berezovets. Journalist Sandra Novikova believes that there are people behind undressing girls, who want to turn Ukraine into a sex tourism center. According to deputy Vadim Kolisnichenko, the main goal of FEMEN is to destroy Ukraine and demoralize the society.

There are more global objectives. If one analyzes all acts of the organization, one can see another trend: FEMEN is opposed to any moves that Russia and Ukraine may take to get closer. They also stand against the people who support stronger ties between the two countries.

The West does not want Ukraine to maintain friendly relations with Russia, as it will greatly strengthen the position of the Russian Federation in the region.