In an effort to promote healthful eating habits, the Russian Duma deputies submitted a draft law intended to tighten the requirements for labeling on food packaging. Particular attention was given to sodium glutamate (E 621), the most popular flavor enhancer used in food products by most manufacturers. 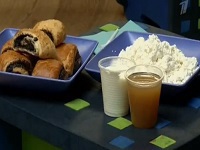 Monosodium glutamate, a crystalline white powder originally derived from a particular species of algae has been long known for its ability to enhance the flavor of any food, especially meat. It is not on the list of health-threatening preservatives, it is not found in the table of prohibited food additives, but according to the latest data, this supplement is not that harmless.

The prolonged use of products containing sodium glutamate leads to addiction, obesity, Alzheimer's and may also be indirectly responsible for food poisoning. Dishonest manufacturers use it to mask not fresh meat because the additive allows removing rotten taste and smell, helping to assure customers of good quality of the product.

A number of products contain monosodium glutamate by default. These products include hot dogs, sausages (the additives are even regulated by GOST), industrial sauces, bouillon cubes and seasonings. McDonald's and similar fast-food restaurants also use this flavor enhancer, which contributes to the popularity of these restaurants. Children and adolescents much prefer fast food hamburgers and cheeseburgers to homemade patties because they are too "boring" for those who have tried the enhanced flavor.

The resulting dependence on MSG pushes for continuous use of sauces, condiments and processed meat products. It is difficult for parents to instill healthy eating habits in their children if the parents themselves consume ketchup and bouillon cubes. Eating habits are formed in childhood, and later teenagers brought up this way are unlikely to give up chips and sausages in favor of cereals and vegetables.

Widespread use of flavor enhancers and preservatives in food products prompted deputies to introduce a new law aimed at protecting the health of the nation. The initiative was launched by Deputies Igor Lebedev and Yaroslav Nilov and brought up for general consideration on July 15th. At the first stage manufacturers will be mandated to enlarge the list of ingredients (to at least 30 percent of the total area of ​​the package), and place it in a clearly visible black frame. In the future E621 may be included in the list of prohibited additives, which may cause a violent backlash among manufacturers.

So far, there is no convincing evidence of harmful effects of MSG because it is also found in natural forms (corn, tomatoes and other vegetables), and the main indicator is the amount consumed. There are maximum allowable daily rates for different ages, but they are not readily available, and the producers have virtually no limits when adding this substance. It is exceeding of the norms that leads to the so-called "Chinese restaurant syndrome" (nausea, weakness, vomiting) and addiction. A complete ban of monosodium glutamate may not be necessary, but it would not hurt to draw attention to the consequences of its regular consumption.

In addition to vocal opponents, E621 has its defenders. The additive (in small doses) is successfully used in medicine to stimulate bowel movement and development of gastric juice. It also helps to normalize stomach acidity and even increases concentration and improves immunity. It is important to enable the consumer to choose products with or without the additive and ensure that such information is transparent. Information on the ingredients has long been as important as information on expiration date.

Optimally, more readily available information on "bad" additives should be supported by a large-scale campaign for healthful eating. The ban on the use of certain additives is only the first step in the formation of proper nutrition habits. Looking at customers' shopping carts in major supermarkets, one can see that the lion's share of their purchases is unhealthful, non-natural products. They include sodas of poisonous colors, various sweets, frozen dinners and instant soups. Perhaps, changes to trends in demand would more effectively change the direction of manufacturers than restrictive and prohibitive measures. In the meantime, consumers often have no alternative when choosing food. All of them to varying degrees contain preservatives or are prohibitively expensive.