School is not a place for religion and religious attributes

The Supreme Court of the Russian Federation recognized as legal the ruling of a court in the Stavropol region that banned the wearing of headscarves in schools. Pravda.Ru asked Olga Timofeeva, a member of the State Duma Committee on Information Policy, Information Technology and Communications, to share her views about the problem. 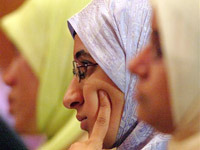 "It's about time the Supreme Court should put an end to the controversial and scandalous process when we started using school and children for selfish gains of adults. Let's go back to what happened in a small village of the Stavropol region. The girls began to wear Muslim hijab scarves at school. Teachers said that it was not the way students should look. The next day, a lawsuit was filed to the regional court. Moreover, those people found an opportunity and money to resort to lawyer's assistance. Clearly, it was a provocation, in which children had been involved.

"My fundamental position as a deputy from the Stavropol region is as follows. One has to leave schools alone - this is not a place for religion, not a place for social stratification. Schools are for knowledge. Our children need to understand that there are educational institutions and there are other types of schools: evening and religious schools, where one can follow special dress code rules.

The conflict that started in the Stavropol region revealed that Russia did not have one single legislative act that would regulate students' appearance. Afterwards, the Stavropol region approved a decree, signed by the governor. The decree regulated the appearance of schoolchildren - it contained the list of rules that schoolchildren should follow in their clothes. The decree banned jeans, jewelry, bright make-up and other similar things that one can often see in Russian schools today.

"I would like to say that the protest from the majority of the population of the Stavropol region was understandable. The provocation was rebuffed. For example, there were ten-year-old girls, who did not go to school for months, but their parents did not care that their daughters were not receiving education. Everyone forgot that teachers and employees and members of the school administration were also involved in the conflict. The director of the school, where the conflict sparked, was forced to move to Stavropol because of constant threats.

"Today, everything falls into place, and we begin to understand that school is a place for knowledge. Moreover, when we discussed this issue with representatives of the Russian Orthodox Church and other denominations, we agreed that religious attributes - elements of religious clothing of any religion - in the appearance of students, need to be eliminated at school. A conflict that starts between parents should not get children involved. The worst thing is when children are caught in circumstances."