These days, for the first time since the Soviet Union, three nuclear submarines - Alexander Nevsky, Severodvinsk and Dmitry Donskoy - are undergoing government trials in the White Sea. There is a military-industrial secret to it: trials are always successful if factory testing team and military crew have a sense of humor. 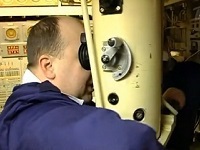 The first two above mentioned ships are the newest strategic project 995 Borei-class nuclear submarine with "Bulava" rockets and project 885 Yasen-class attack submarine. Dmitry Donskoy is the largest in the world nuclear ballistic missile submarine, designated Project 941 Akula class that will act as the enemy boat during the first two trials.

The first phase of Nevsky trials has been completed. In the coming days, the crew must verify proper operation of all components and systems of the ship, including the missile systems controls. If no serious deficiencies are revealed, the second phase will be scheduled for the fall. At this stage the ship will have to launch several Bulava missiles both from the surface and under water.

It is expected that during the launch, in addition to the standard trial of the launch complex, the latest automated control system of the Navy allowing retarget Bulava in flight will be tested. Alexander Nevsky will be included in the Pacific Fleet.

Dmitry Donskoy will perform several tasks at once. It will listen to and record the sounds of movement and work of the units and mechanisms of Severodvinsk and Nevsky. In turn, submarine detectors of the new submarine will test their detection stations while watching Dmitry Donskoy. In addition, Severodvinsk and Alexander Nevsky will fire training torpedoes without warheads, checking their fire control systems and torpedo mechanisms with new torpedoes. In the future, Dmitry Donskoy will be a staff submarine used for trials of not only the newly built, but also modernized submarines.

Here are a couple of naval stories associated with the delivery of the submarines repaired and built in Severodvinsk. The first story was told by military submariners. It was in late 1980s, the heyday of perestroika, the beginning of the end of the nuclear-ocean navy. A freshly repaired nuclear submarine was moored at the Severodvinsk ship yard. Various commissions and test units, including political units of the military, visited the boat in a continuous flow. Commissioners were scratching their heads trying to identify some momentous party accomplishment that could be timed to the completion of the repairs.

One day the boat was visited by an official in the rank of the political directorate of the Northern Fleet. He walked through the compartments, looked into the crew's cabin, interviewed the first available submariner for knowledge of fresh quotations from Gorbachev's speeches about the importance of perestroika and acceleration, and checked officers' notes of historical speeches of the last party congress. He was about to leave when suddenly saw a well-fed cockroach in the controls room.

The commander and the responsible factory officials were called on board. The incident had political overtones as having cockroaches on the noble ship fleet of the country of victorious socialism was completely unacceptable, particularly after years of repair. Disciplinary scolding was followed by strict instructions: insects on the ship should be caught and eliminated.

The official added that he would be back in two days with another check. Submariners and factory officials were upset that a cockroach that crawled out of the blue ruined the trials. Incidentally, apparently the cockroach was the only one on the ship, and after the compartments were painted there were no insects seen on board.

Then a mechanic whispered something in the ear of the upset commander. The commander waved his hand, letting the mechanic do whatever he wanted, and retired to his cabin. Two days later, the high commission of the Political Department of the Navy visited the ship again. The ship's political officer trained by the mechanic made a personal report about the elimination of all deficiencies. The reporter demonstrated the leadership a freshly produced billboard "Limelight of Perestroika" in the living compartment, and introduced an Uzbek sailor who knew by heart the names, ranks and years of birth of all members of the Politburo. He then proudly called for a lieutenant who memorized all the awards of a Navy Commander Admiral Gorshkov.

At the end he presented the main treat. In the control room of the submarine there was a wooden box that looked like an ordinary garden birdhouse. A pile of operational documentation near the box left no doubts that this was not a birdhouse, but a special trap for cockroaches. The commissioners of the political department were studying the documents for the new weapon for a while. The documents included tactical and technical data, state tests protocol, combat characteristics and safety measures.

There was a document with the official seal and the signature of the general director of the company, stating that this device was given to the crew free of charge, and its cost was not included in the estimate of the repair work. The non-conformity about insects was closed by the inspectors. The cockroach, as if realizing the importance of the moment, did not appear in the controls room.

Rumor has it that later the submarine crew was set as an example at a meeting at the headquarters of the Navy Commander. The mechanics had to answer questions about the origins of his brilliant invention, and the way he cooked up the paper. Most importantly, everyone was interested how he managed to talk the director into signing the paper. The mechanic just grinned, saying that the director, too, was a man with a sense of humor.

Here is another, very similar story told by factory workers. The circumstances and plot are nearly identical. During the last stage of sea trials, a nuclear Akula-class submarine was sitting at Umba-Bay of the White Sea, the traditional location. The logbook included entries like "The bay inspected, no comments" or "Start cleaning." The commander, sick of the sight of complete inactivity of the military crew and factory officials, was enraged. He was rushing through the compartments in search of work for his subordinates. Every time he saw a comment he scolded the sailors as his job description required. The crew was looking forward to the second shift when the commander would finally leave for the bridge as a watch officer.

In search of activity, the commander went to the officers' room for some preventive scolding. He came in and nearly burst with righteous indignation. The sacred commander's place was occupied by a quiet civilian from the factory wearing glasses and a shabby shirt.

In his hands, instead of a technical description of some piece of iron, he held a detective story. That, of course, made the civilian three times guiltier in the eyes of the commander.

The commander's face turned purple, and curses went flying out of his mouth. The civilian pouted and proudly left the cabin, offended. Meanwhile, a command to prepare for the second shift was announced. The commander left, trying to calm down. During his watch an inspection of the pressure hull for leaks was scheduled as well as the beginning of the transition to the point of immersion.

The outraged young serviceman went to the upper deck, into one of the many "archipelagos" between the cabins. Fortunately, the submarine has spacious cabins.

The civilian got distracted from the exciting detective story by a sudden strange noise. He shut his book and started thinking. A scary thought pierced his brain excited by the detective story. He realized that the exhaust fan was powered up, which meant that a check for leaks was about to start.

The young man ran to the upper conning-tower hatch just to find it battened down. A howl reminiscent of a siren was heard over the White Sea. He rummaged around in horror. Everything looked like the ship was preparing to submerge. The young man howled and dropped bitter tears on the hatch, scratching the iron like a cat and knocking on the closed door with his forehead, frantically trying to recall a prayer.

And then someone tapped on his shoulder. He saw a watch officer who descended from the bridge, the commander. They looked at each other in disbelief. There was an hour and a half until the immersion.