Child adopted from Russia used as sex slave in Australia, US and Europe 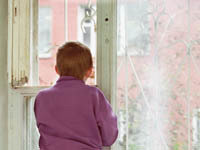 "American citizens Mark Newton and his partner from New Zealand Peter Truong persuaded a woman from Russia to bear a child for them for $8,000. Having taken the boy, the so-called parents committed acts of a sexual nature with him, filming it all on video and taking pictures of it," Astakhov said.

The child became a victim of at least eight more pedophiles in France, Germany and the United States, "where he was brought specially for making pornographic films," added Astakhov. "Newton has been convicted. He has been sentenced to  40 years in prison. He will have to transfer 400,000 dollars to the child's account. Peter Truong is awaiting for his sentence in New Zealand," Astakhov wrote.

"The adopted Russian boy, who suffered from many years of sex exploitation, has been transferred to an American family," said Astakhov.

In public, Newton and Truong were playing an exemplary family. In 2010, the Australian edition of ABC published an enthusiastic article about them entitled: "Two dads are better than one." The article was illustrated with an idyllic picture of the happy, as it seemed, family.

Adam was taught from infancy that sexual acts committed with a child was an absolutely normal phenomenon. The boy was perceiving everything that was happening to him as something normal. During investigation, police officers questioned the boy, but the child never said a bad word about his two dads, 7 News reports.

By the time when the investigation was in full swing, the couple together with the child moved from Australia to the U.S.. In America, the men started to claim that the Australian government was persecuting them because of their sexual orientation. However, soon the Australians found convincing evidence to prove that Adam was subjected to violence, and in the autumn of 2011 the boy was taken away from the adoptive parents. The investigation continued, more evidence was found to prove that the pedophiles tried to contact other children.  However, no facts of violence against other juveniles were found.

"Russian orphans have always attracted foreign perverts due to their availability. Barring foreign adoption, we put a barrier for scoundrels," concluded Astakhov. Russia has recently banned the adoptions of Russian children by American citizens and foreign gay couples.