Beyond mass tourism: Trevelez and the genius of the Alpujarras

In the mountains the shortest way is from peak to peak, but for that route thou must have long legs. 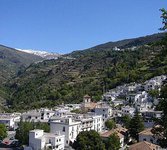 Spain has been since two centuries the specific country of two kinds of tourism: the first was based upon elitism, romanticism, various nostalgias such as the one created by American diplomat Washington Irving and his tales from the Alhambra or French romantic traveller Théophile Gautier who in his diary was already predicting the future homogenization induced by modern tourism. Such elitist tourism was reflected in great movies like Pandora, the snows of Kilimanjaro or the sun also rises. O great Henry King! Spain was then a legend, the sacred land of the traveller.

The decline soon began with Franco whose regime sold a cheap land and generous sun to mass investors.

The second tourism is then the tourism of mass, which came with Europe and the social-democrats and was made out of concrete and booze that had destroyed millions of lives and kilometres of landscapes and seashores.

Yet still Spain has something to offer to the lucky and patient traveller, the one who still believes that travel can be a kind of spiritual voyage, of initiation. It is not for nothing that well-known genius of Islam Ibn'Arabi, who wrote the treaty of voyage (the Arabic word for voyage is safari) was born in Murcia, praying, writing and travelling his way until...Damascus where I hope his grave stands bravely against the furies of time.

As Gautier observed two centuries ago, 'the more the communications will progress, the less we shall have to observe and discover'. Progress induces indeed the selling of one's soul and a total abandon of peculiarities. And the French poet remarked in 1843 that young women in Spain and especially Granada were dressed like in Paris. What would he say nowadays? We have given up our identities and are all living in the American air-conditioning nightmare denounced by another great American character and traveller, Henry Miller.

Granada has been destroyed by Mass tourism and modern investing obsession, the legendary province covered with highways, real estate monsters and bureaucratic concrete juggernauts. Yet the mountains, as long as they don't interest skiing entrainment industry, still offer their mystery and their hidden soul to the awaken traveller.

On the other side of the Sierra Nevada, you can so discover the Alpujarras, where the expelled Moors fought bravely form their inaccessible pikes and caves. It was then the last eagle nest as it is today the last eagle's nest fort the traveller or the adventurer. The small and articulate road form Granada (let us not denounce the progress for once!) allows us to pass form pueblo to pueblo, discovering enchanting hanged villages like Bubion, Pampaneira or Busquistar. Then you finally get to escarpment-surrounded Trevelez, situated at 1700m, a fresh place to enjoy when you come from the heat-besieged flat Andalusia and its crowded beaches.

Shall I describe the place when I have to compete with Google images?

Of course Trevelez is beautiful, of course there is a wonderful nature, of course you have a heap of wild springs, of course you are at the feet of mount Mulhacén, the highest peak in Spain; yet it is no the point to get there. The reason is that Trevelez is a capital of the dried mountain ham, a ham that was and still is a political and religious weapon (jamon iberico!) and a place that has miraculously kept its character its souls and its people, despite the fact that the men had to leave their pueblo in order to get a living for their family. Fortunately they came back, mainly form Germany, rebuilt their homes and beautifully maintained their village, its soul and its landscapes. One tell me nobody needs to find a job here, even if we are in a country with 37% unemployed people. Everybody has his lot, his garden and his animals; many smart goats and horses adorn the fields and meadows of this mountain landscape that irresistibly reminds to me the French countryside.  You still can observe an energetic and hard-working people, thin children and dynamic aged men and women who can still climb the mountains in their eighties. This is this dynamism which strikes us when you come from the deactivated Spain of the plains. Like rain, unemployment in Spain stays mainly in the plains!

You can of course rent a home for the summer, for here there is no risk to face a grim weather and the fifty rainy days of Ireland or Brittany. For lodging for a few nights I shall warmly recommend the Fragua that belongs to an old and hard-working local family and is divided into two hotels. The Fragua 1 with a typical and awkward character, stands in front of the Ayuntamiento (city hall) and reflects the beauty and silence of the whole place; la Fragua two offers one more star, larger rooms and a swimming-pool which really is a place of meditation (I remember an interesting interview with Tom Ford where the American designer defended his theory of the swimming-pool as a meditation spot). The family business here offers too the presence of Antonio and his sister Rosa who provide the familiar atmosphere of the Spanish mountaineers and the efficiency of a moral business. The sight in the Fragua two is grandiose.

Snowy in winter, beautifully golden in autumn, Trevelez starts at 1400m high and finishes up at 1700m, covered with the sound and fury of its peaceful springs (Rio Chico and Rio Trevelez); these slopes and a rare sun-exposition offer a lot of micro-climates and little worlds. Every barrio here, many houses are still possessed by a soul and atmosphere. It reminded me exclusive places of India, like Manali or Mac Leod Ganj (Darjeeling being too rainy for the comparison!).

Of course myriads of books and guides will comment the richness of flora and fauna and how to find the best scenery and tracks. Yet to understand such a place I still recommend the reading of more classical authors and spiritual travellers.

He, who climbs on the highest mountains, laughs at all tragic plays and tragic realities.