In late May a press conference with the head doctor of the National Center for Prevention and Control of AIDS and Infectious Diseases Sergey Pogan was held in the Komi capital Syktyvkar. Journalists were informed about the status of the fight with the "plague of the 20th (and now 21st) century" - HIV infection. The comparison is no accident. While HIV patients can live for years and even decades, the total mortality rate is the same as in the days of massive epidemics of plague in the Middle Ages.

The only difference is that deaths do not occur simultaneously and are stretched out in time. The situation with HIV and the dynamics of its distribution causes concern in the small northwestern Russian republic. In Komi, 20 percent of the population annually submits to HIV tests, while in Russia, on average, this number does not exceed 15 percent. However, among the residents of Komi only 0.2 percent of the population is infected, compared to 0.4 percent in Russia and 0.6 per cent in its North-West in particular. However, there has been a steady growth in the number of infected residents since 2011 when there were 210 of them compared to 212 in 2012.

Sergei Pogan drew the audience's attention to some interesting facts. First, in recent years there have been changes in the pattern of the infection. If over 20 years of post-Soviet period the overwhelming number of registered patients (58 percent) were drug users, now nearly all of the newly infected are victims of "unprotected sex" and, simply put, promiscuity.

Second, there has been a significant change in the age structure of infected people. If previously young people prevailed among them, in recent years the majority of those infected is in their forties and older.

Traditionally, the share of men in the total number of HIV patients is much higher than the number of women. However, the percentage of women among recently infected has increased significantly. This is evidence of the erosion of moral criteria in women who became adults in the early 1990s and later, when the traditional understanding of the need to have sex with a beloved man was replaced with a desire to have sex to achieve a variety of goals, from getting pleasure to earning money. 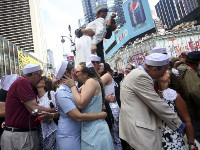 However, according to doctors, another important rule can be observed in the current statistics. The "ageing" of HIV is due to the fact that in the age-old opposition of "wise fathers" vs. "green youth" the situation is exactly the opposite. Social advertising of safe sex has yielded results, but mostly among young audiences. The older generation who brushes aside these recommendations and sticks to the old habits in their sex life is now the main target of HIV infection.

Young people, while still having variety of sexual partners, at least, make a greater use of condoms. Meanwhile, the people of the older generation, who at the sight of all the above accusations automatically identify themselves with the glorious cohort of seasoned critics, paid little attention to such "small things." Apparently, they are paying for it now. The rules are simple: observe sex hygiene and listen to the advice of professionals. There is wealth of experience accumulated in the fight against HIV, and such measures, according to experts, can reduce disease incidence by 90 percent, limiting it to risk groups - homosexuals and drug addicts.