America learns to pay for labor

On June 19th, 1862 slavery was abolished in the United States. President Lincoln put his signature under the respective law. To make all the people of America free, one little thing had to be done - the law had to be enforced. There was only one obstacle, the Civil War that was in full swing in the United States exactly for that reason. 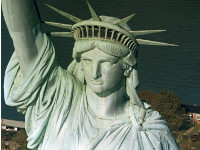 Obviously, the premise of the Civil War was more complex than the differences in the ideological positions of the North and the South in regard to slavery, but the issue of slavery has been one of the most acute. In the North manufacturing was booming, and mainly immigrants worked in the production. The South developed as an agricultural region and mainly slaves worked on its plantations. There were numerous tax and legal issues that were getting increasingly more serious each year. There was a danger that northern and southern states could no longer exist under the framework of one country.

The coming to power of Abraham Lincoln after the election victory in 1860 was the signal for the beginning of secessionist processes. Southern states began separating, afraid to be in the minority in decision-making at the federal level, although the constitution did not allow it. As a result, 11 states representing 40 percent of the United States declared independence.

On April 19th, 1861 battles began. The American Civil War lasted four years and three months until July of 1865. In June of 1862 the law proclaimed the abolition of slavery throughout the United States, but at the time it was nothing more than an ambitious statement because it was not clear who would win the war. On January 1st, 1863 "Emancipation Proclamation" of slaves signed by Lincoln two days earlier came into effect. The document consisted of two presidential decrees, the first of which declared all slaves in the Confederate States of America (the South) free, and the other one separately listed ten states   to be covered by the abolition of slavery.

The next step was the 13th Amendment to the U.S. Constitution. It was adopted by Congress on January 31st, 1865, ratified by the required number of states on December 6th, 1865 and entered into force on December 18th, 1865. The amendment prohibited slavery and forced labor in the United States, except if ruled by a court as punishment for crimes. However, the ratification of this amendment took painfully long. It was last ratified by Mississippi in 1995, which, of course, was a mere formality (international instruments prohibiting slavery were adopted much earlier). The procedure for the ratification in Mississippi was fully completed only in the current year.

After the victory of the northern states in the Civil War, all above documents came into force. Despite the subsequent pullbacks like "Fugitive Slave Act" in 1850, slavery in the United States was defeated.

The mass movement for the liberation of slaves began way before it has received official support at the state level. It is believed that it originated in the 1830s, simultaneously with the publication of the newspaper "Liberator." The American Anti-Slavery Society was established the same year. Ten years later, the united movement split in two. Most of the fighters for the rights of slaves were supporters of peaceful methods. However, a significant number of abolitionists believed that without the use of armed forces the results would not be achieved. In 1859, an attempt was made to free the slaves by force. However, it was unsuccessful.

American abolitionism quickly exhausted itself. From the beginning, its supporters have been criticized for undermining stability in the relationship between the North and the South drawing attention to sensitive issues that the authorities wanted to ignore. In addition, the collapse of the old idea of ​​buying land on the coast of Africa and founding there the state of Liberia where it was planned to bring redeemed slaves convinced that things were not that simple. After all, it turned out that not only slave owners did not want to let go of their free workers, but the slaves who were born in the United States considered America their home and did not want to leave.

However, it was the awkward actions of the abolitionists and power solutions adopted under their influence enabled humanity to make a huge step forward and abolish slavery in its contemporary sense.