This year marks the 50th anniversary of the first flight in space performed by a woman. "Hey Sky, take off your hat, I'm coming to you," the first female cosmonaut uttered these words when the order "start" was given and the rocket went up into the sky. Tereshkova spent in space 2 days, 22 hours, and 50 minutes. Another Russian cosmonaut Valery Bykovskii was in the Earth orbit on "Vostok-5" at the same time. 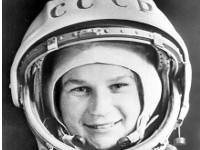 Valentina Tereshkova traveled to space on "Vostok-6." She circled the Earth 48 times and became the tenth cosmonaut in the world. For three days all radio and TV stations of all countries talked about Valentina. British newspaper Daily Express called Tereshkova "Miss Universe."

For many years Tereshkova remained the only woman to conquer space. Only in 1982 Svetlana Savitskaya became the second woman in space. She traveled to space twice and was the first woman who went into the open space.

Sergei Korolev decided to launch a woman into space after the success of the first flights. He wanted to finally prove the world the superiority of socialism. In early 1962 the search for a suitable contender commenced. Korolev looked for a female parachutist under 30 years old, no taller than 170 cm (5'6"), and no heavier than 70 kilograms (154 lbs.). There were plenty of applicants, but the selection process was very strict. On March 12, 1962 the first unit of women who dreamt of space exploration was created. The list included Zhanna Yerkina, Tatyana Kuznetsova, Valentina Ponomaryova, Irina Solovyeva and Valentina Tereshkova. All of them were beauties who longed for the sky. The training commenced, and the list of lectures and workshops included the following subjects:

- Training for developing body resistance to the stress of a space flight. The women had to stay in a heat chamber wearing flight suits at a temperature of + 70˚C and 30 percent humidity. In addition, they had to spend 10 days in an isolation chamber away from sounds and people.

- Training in weightlessness was performed in MiG-15. When performing a "parabolic flight," weightlessness was produced in the cabin for 40 seconds. During each flight there were three or four such sessions, and every time the women had to write their name, try to eat and talk on the radio.

- Parachute training. Before landing a cosmonaut was ejected and landed with a parachute. There was a risk that the capsule would land on the water, and the women had to jumps into the sea wearing suits not fitted for their size.

After a course of general space training there were dropouts. Three women were left in the unit - Ponomaryova, Solovyeva, and Tereshkova. Initially it was planned to send two female crews simultaneously, but later this idea was abandoned. When conducting trainings for females, it turned out that in a certain period of the menstrual cycle resistance to extreme factors plummeted. A series of studies of medical and physiological state of the female body were conducted on different days of the menstrual cycle. The results showed that on the 14th-18th day of the cycle the female body was least resistant. Doctors have provided their opinion and made a sequence for the flight admission: Ponomaryova, Solovyeva, and Tereshkova. Valentina was the last one to fly.

However, Ponomaryova and Solovyeva had a different background and were simple employees. Tereshkova was a Komsomol secretary at a plant and worked as a weaver. Her father was killed in the Finnish War when she was two years old.

The choice was made by Khrushchev. Contrary to the conclusion of the medical commission, Tereshkova was sent to space. This choice was neither discussed nor disputed by Korolev, Keldysh, and Kamanin who was involved in the selection and training of cosmonauts.

The launch was delayed for a day. On the day of the flight Valentina told her family that she was leaving for a parachutists' competition. Her family found out what this competition was in reality on the radio. Many say that Valentina was not good at the spaceship orientation and poorly tolerated stress. Yet, she was able to withstand the entire flight, made notes in a logbook, and made photographs of the horizon. Kamanin believed that Tereshkova made a better start than Nikolayev and Popovich. The spaceship safely landed in the Altai region despite a strong wind. Tereshkova had to remove the locks and detach the uncontrollable parachute. The landing was far from comfortable, and the cosmonaut had a large bruise on her nose.

Ball-shaped aircraft had no aerodynamic qualities. Landings were performed on a ballistic trajectory - free movement of the body. At the altitude of seven kilometers cosmonauts were ejected, and at the altitude of four kilometers their parachutes opened. The first "Vostok" ships were jokingly called tin cans. The cosmonauts not only were unable to stand up in the air, it was impossible to move one's hand. It was incredibly difficult for a female cosmonaut to spend three days under such conditions. Rumor has it that upon his return to the ground, the first cosmonaut Yuri Gagarin could not remember the date and month, and forgot Korolev's name. For a week he was depressed, and no one recognized the usually cheerful, charming Jury.

A few days later Valentina was scolded for violating the regime by giving the food supplies she has not eaten to local residents. After three days of fasting she enjoyed greasy local food. Doctors' verdict was harsh - the female body is not fit for zero gravity conditions.

Tereshkova was met in Moscow with highest honors. She was given multiple awards, titles, was invited to events and interviews. Valentina Tereshkova is an Air Force Major General, Ph.D., a hero of the Soviet Union, and a member of the Supreme Soviet of the USSR. Many remember her fondly as she helped people in difficult circumstances.

Valentina Ponomaryova became a Colonel of Aviation and earned a Ph.D. Irina Solovyeva also earned a PhD and participated in Antarctic and Arctic expeditions.

After the flight, Valentina Tereshkova was asked how the Soviet Union could thank her. She did not ask for anything except to help her find the place where her father died.