Are Russians as lazy as they are painted?

There is a myth of unknown origin concerning natural laziness of the Russian people. Meanwhile, during harvest time you would not be able to find more hardworking people than Russian peasants. Even after the harvest season there was enough work in the village and seasonal work in the cities. Why is the misconception about the nature of the Russian people so tenacious? Let's try to find the reasons looking at the church calendar. 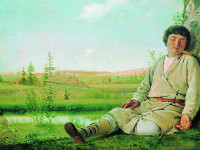 Let's begin with a historical fact - the reason of glaring poverty of the Russian countryside was explained by Soviet historians as cruel serfdom. However, the cause of low productivity has always been lack of time for a thorough treatment of the land because of a very short agricultural cycle - 125-130 working days. There was not enough time to harvest livestock feed. Coupled with very long periods of cattle staying inside, this led to low productivity of livestock (Russia is different from France where even pigs were herded), and as a consequence - an acute shortage of fertilizers.

In addition to the infamous "exploitation," the climate factor has always had a great impact on the historical development of Russia. In Europe, the temperature fluctuations were up to 10-20 degrees around the year, while in Russia the fluctuations were from 35 to 40 degrees. A warmer climate allowed the Europeans to farm most of the year and be accustomed to regular work. There was no need to hurry with sowing or harvesting, whereas in Russia, due to a short spring flowing into a hot summer, the harvest was dependent on the timeliness of planting.

Summer was the time of extremely hard work. It was followed by a period of 5-6 months of leisurely passive labor. Considering the lack of time, Russian farmers had to do the volume of work that in under more favorable conditions would have taken no less than 40 days within 21-25 working days. In practice this meant inevitable labor without sleep, working night and day, with the entire family involved (including child and old people labor and women doing men's work). However, this does not mean that Russian peasants, even in the busy season, did not have time to rest, just like Russian factory workers.

At one time Russians were taught in school that an eight-hour working day peasants passionately fought for was a real blessing for them. However, before we talk about it as a huge gain of the October Revolution, it makes sense to look at the church calendar and count the number of holidays and, respectively, non-working days in Russia before the revolution.

Russians heard in history classes that Sunday was a day off in Russia at that time, while the name day of Sovereign Emperor, Christmas, and Easter were the only holidays. Yet, allegedly people worked 10-15 hours a day in appalling conditions. As for farmers, they worked even harder.

All this is true, but if we were to count holidays on the church calendar, it is easy to see that before the abolition of serfdom in 1861 peasants had to work only 38 percent of the time, and were off work 62 percent of the time. This means that under Tsar and feudal landlords, people rested more than they worked, because in addition to Sundays there were numerous holidays when work was strictly forbidden.

While there is not much can be done about the number of Sundays per year, holidays endlessly proliferated. In 1902 there were 258 non-working days a year, 123 of them holidays. Sixteen-hour working days in the factories were the norm in the first place because when were people supposed to work? If in 1913 Russian peasants had the same number of days off as U.S. farmers, i.e. 68 instead of 135, and the money spent on holidays for drinking would be spent on the economy, Russia would have become a global agricultural power over a few years.

Some people understand it today. People of that time knew it as well, and they were not scientists but simple peasants. In the fall of 1906 Kharkov newspaper Vedomosti published a letter of a peasant K. Blyudnikov, a former sailor from the battleship Retvizan who lived in the village Belenky of Izyumsky district. He wrote: " ... brother peasants, of only you drank less, you would have been ten times richer!" However, the problem lies in the fact that peasants could not drink less because church holidays followed one after another.

Clearly, the abundance of holidays was beneficial in the first place for priests, because on holidays people brought them offerings, which is why no one thought of reducing the number of holidays.

In the 17th century there were instances where the boyars of noble families were thrown into dungeons because the patriarch came to know that they made people work during a holiday.

Orthodoxy is not Protestantism, with its propaganda of hard work, but a religion with entirely different traditions. It is not surprising that in the fields of Russian peasants grains would fall on the ground, wheat would be beaten with hail and drenched with rain and the villagers, instead of harvesting, would indulge in relaxation and laziness, because they had no other choice than to celebrate.