Top 10 most dangerous countries for tourism 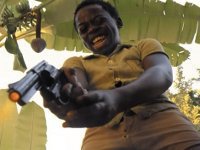 There are countries in the world where local people and even more so tourists feel uncomfortable. These are mostly countries with high level of crime such as murder, robbery in the streets, corruption, hostage-taking, terrorism, and so on. But tourists enamored by local beauty sometimes do not even think about it.

The influential magazine Forbes has compiled a rating of the most dangerous countries. The vast majority of them are in Africa. The safest countries are in Europe. The authors of the list used information provided by major companies in the field of risk analysis, Control-Risks and iJet Intelligent Risk Systems, as well as the U.S. State Department. The safety of traveling to certain countries was estimated according to the information about the level of crime, civil unrest, police protection, threats, attacks, kidnappings, and geopolitical stability.

1. Somali. This country is called the "modern Tortuga" thanks to the gangs of pirates that work along the coast and attack foreign ships, kidnap people and demand ransom.

2. Afghanistan. Despite the fact that there are still coalition forces, the overall situation is very difficult. Attacks of the "Taliban" movement only increase, terrorist attacks occur frequently and civilians are killed. In addition, the country has a very difficult situation with drug trafficking.

4. Congo. Since 1998, this country has been emerged in armed conflict that claimed the lives of over 5.5 million people.

5. Pakistan. Hostilities are ongoing between the rebels in north-west Pakistan and government troops.

7. Yemen. The country has militaristic groups associated with al-Qaeda. In addition, the state's oil reserves are being depleted rapidly, which can cause further deterioration of the situation in the country.

8. Zimbabwe. The country has a multi-million inflation and high levels of corruption, resulting in permanent conflicts and killing.

9. Algeria. The security of the State is threatened by fundamentalist groups associated with al-Qaeda. Airports, hotels and oil industry infrastructure of Algeria remain vulnerable targets for all kinds of terrorists.

10. Nigeria. In the most populous African country rich in oil criminal gangs are operating and rebels abduct locals and foreigners.

Despite the fact that the most dangerous countries in the world represent four continents, they all have one common characteristic - they once were European colonies. A share of the blame for the current unfavorable situation in certain countries can safely be passed onto their former colonial masters. They forced their will on them and showed a bad example to follow.

Somalia is dangerous both on land and on water. A war between the clans has been ongoing in the country since 1990. Army militants periodically rob people or kidnap them for ransom. On the water pirates are waiting for passing ships. Piracy is one of the many dangers in Somalia. Over the past year, pirates hijacked 42 ships. The situation in the country is chaotic. Since 1994, Somalia has changed 14 governments.

Afghanistan is a poor and undeveloped country. During the war with the Soviet Union 12 million mines were installed throughout the territory of the country that claim lives of thousands of people to this day. In addition, the country has a high probability of terrorist attacks that occur in Kabul and other cities. But Afghanistan is particularly dangerous for  women. The country has a traditional of various forms of violence against females, poor health, and desperate poverty. There are numerous cases of domestic violence, female feticide and more. Women in Afghanistan have little to no economic rights, which is a threat to their lives and well-being.

Early last year, the UN Office on Drugs and Crime released a report saying that Brazil has become the world leader in terms of the absolute number of murders (43,909 a year). According to sociologists, per capita the country is on the third place in the world in terms of homicides (22.7 per 100,000 residents).

Colombia is also the cocaine capital of the world. 75 percent of cocaine is distributed by "Cali Cartel" and "Pablo Escobar" - paramilitary groups fighting with the local government.

As mentioned above, the UK has a certain responsibility for the situation in Somalia. Yet in Britain things are going very well. The International Institute for Peace and Economics conducted a study that showed that over the past 10 years murder rate and violence in the UK declined considerably more than in other Western European countries. For example, the most dangerous country in the Western Europe is Belgium with 1.7 murders per hundred thousand people.

In the UK the number of murders has decreased nearly by half. In 2012, the national average was recorded as one murder per 100,000 residents. The total number of crimes over the past decade has fallen by a quarter. The safest area in the UK is Norfolk (administrative district Broadland). Over the years the number of patients in the clinics in England and Wales affected by violence-related crimes decreased by 14 percent.

Representatives of the Institute of World Economy cite several reasons for the decline of crime in the UK, in particular, a significant improvement in the methods of investigation and search of criminals associated with the introduction of modern technology. Among other reasons are growth of average wages and reduction in the consumption of alcohol by the British.