Russian smokers to live in ghettos?

Limiting the rights of smokers is not an easy task. As soon as the measures against the "smoky death" are announced, outspoken advocates of tobacco lovers emerge, and the media begins discussing the economic harm of such prohibition. However, everyone is forgetting about the health of non-smokers. 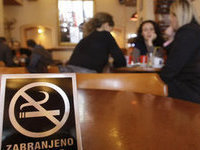 The State Duma in February of this year adopted a federal anti-smoking law. On July 1, 2013 smoking will be allowed, figuratively speaking, only by the window or while hiding behind a garage. There will be a ban on smoking in public places, restaurants, trains, airports, entrances and hotels. Smoking will be completely banned in 2013 in universities and schools, government offices and transport, in 2014 - in restaurants and cafes, and in 2016 - in all enclosed public places.

Even before the adoption of this law smokers were outraged and claimed that such measures violated their legal rights. But how effective is the legal document and how timely are the restrictive measures? The bill, prepared in August of last year by the Ministry of Health of the Russian Federation, makes it illegal to sell cigarettes in kiosks, display tobacco products, as well as show smoking in movies for children. Smoking is in fact will only be allowed in the street, and even then away from schools, kindergartens, buildings, and playgrounds.

There were solid grounds for such measures. According to the Russian government, 44 million people smoke in Russia, which is almost a third of the population, including children. Russia is considered the most smoking country in the world. Prime Minister Dmitry Medvedev said: "In the discussion of these measures, there is a lot of talk about discrimination against smokers, but we forget about the fact that nearly 60 percent of adults and children, especially infants, are discriminated against by smokers. They are forced to breathe toxic tobacco smoke, although they are not smokers. Approximately one third of Russians have to breathe toxic smoke at work. The bill is to protect all these people, and smokers can smoke outside where the smoke will not harm others."

"The earlier we ban smoking in public places the better," said the director of the Institute of Emergency Children's Surgery Leonid Roshal. "We need to establish such fines that smokers have no desire to break the law." The bill restricting smoking in public places will significantly improve the health of the Russians, dramatically increase the life span, and will bring advantages for the economy," said head of Rospotrebnadzor Gennady Onishchenko.

Everyone should understand that there is no safe tobacco smoke. The smoke inhaled by nonsmokers is several times more toxic than that inhaled by smokers. When people smoke indoors, the air pollution is comparable to that during a fire. Ventilation does not help because tobacco smoke spreads through the smallest cracks, and its poisonous derivatives are spread by smokers on their clothes and hair. Toxic substances remain on all surfaces for many months. Airing only removes the smell of smoke, but not the toxins.

Smokers strongly oppose the anti-smoking law, claiming that the ban violates their civil rights. In particular, they consider the adoption of such law discrimination with no alternative to the ban - for example, equipped smoking rooms. The movement for the rights of smokers intends to collect one million signatures against the tobacco law.

On April 25th, Moscow hosted the annual congress of the movement for the rights of smokers in Russia. The leaders of the movement summed up the work of the organization and discussed the future plans of action in connection with the adopted anti-smoking law. Among guests of honor who attended the congress were a poet Vladimir Vishnevsky, politician Gennady Seleznev and TV host Dmitry Dibrov.

Andrei Loskutov, executive director of the movement, said in his keynote address: "The problem of discrimination against smokers can only be addressed constructively, without calling for civil disobedience, or looking for loopholes in the legislation. We need to offer real steps to change the articles of the law that violate the rights of smokers the most.

We cannot allow apartheid against the 44 million citizens of Russia." Vladimir Vishnevsky supported him: "I think the authorities are crossing the line, but now it is not too late to oppose it with public voice, including that of non-smokers. "

"No one can force another person a lifestyle and attitude towards their health and leisure. This is personal life and private space, in which no one should interfere. The idea of ​​forcing a healthy lifestyle on people, making them eat right or force good manners is detrimental for a healthy lifestyle. Health and morality cannot be forced through legislative pressure, this way there will no longer be morality or health," said co-chairman of the movement Mikhail Leontyev.

The movement plans to propose measures to equip designated places for smoking in public places, especially in hotels, hostels, train stations, airports, and long-distance trains. The movement with the support of trade unions will continue to ensure that the workplace smoking is regulated by collective bargaining agreements. In addition, the movement wants to invite the authorities to issue "smoking licenses" that would allow restaurants creating designated areas for smokers. In addition, members of the movement spoke against a number of additional constraints that authorities in some Russian regions intend to implement.

The movement decided to collect a million signatures of Russian citizens in support of their initiative by the end of 2013. This will attract the attention of the federal legal authorities to the problem of violation of the smokers' rights. Famous actor Mikhail Boyarsky headed the movement "For the rights of smokers."

The movement "For the rights of smokers" is a Russian public organization founded in March of 2012. Its purpose is to help uphold the principles of equality between smokers and non-smokers, building trusting relationships. The leaders of the movement are opposed to enticing non-smokers into smoke. They refuse to promote the process of smoking, oppose smoking among minors, and do not dispute the harm of smoking.

The most common objection to the introduction of restrictions on smoking in public places is the claim that it violates the rights of smokers. However, nowhere in the world people are allowed to harm the health of others under the influence of a bad habit. Limitation of opportunities to take actions that cause or may cause any harm cannot violate the rights of persons under international standards. The lack of a ban on smoking is a violation of the rights of people, especially people with asthma and allergies, and of course, children. The objections of smokers, no matter how famous, are ungrounded, and the State Duma has not violated any of their rights.