Was Lady Thatcher the wicked witch of the West? 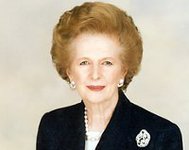 There is but one Wicked Witch in all the Land of Oz -- the one who lives in the West.

Is Maggie Thatcher, the famous iron lady, the mother and prophetess of this new golden age of oligarchy and cryptocracy? Given her posthumous prestige, we may answer by the affirmative. She is now considered by our insignificant political class like her spiritual guide.

In a way Margaret Thatcher was very lucky, and England and the West very unlucky. She destroyed the welfare state; she armed new deficits, social warfare and a cultural disintegration worthy of the fable of the bees of infamous Mandeville. A consumed individualist, she was the perfect schoolgirl who applied the ridiculous and insane shock therapies devised by then peripheral professors as Von Hayek and Milton Friedman. Now the battle has been won everywhere: the big fish are eating the little ones, or ignoring it in tax paradises. Strangely 'this strange eventful history' of neo-liberalism started in Latin America where our democrat apostle found a great ally with Pinochet and a good idiot enemy with Videla, both faithful disciples of the voodoo economics (as once quipped Bush the Father) of the Chicago boys. Lady Thatcher was a successful witch, like those who are peopling the principality of the Wizard of Oz.

And that country, where the Winkies live, is ruled by the Wicked Witch of the West, who would make you her slave if you passed her way.

Maggie Thatcher was a lucky witch indeed. For she was elected PM in 1979 thanks to a parliament accident, then re-elected in 1983, despite skyrocketing unpopularity, thanks to the penguins of the Falklands wars, and in 1987 thanks to a non-existent Labour and a brief real state booming in England.

I remember very well this time: England was still an enchantment; all the last great rock generation, all my young English friends hated or at least despised her, but they were doomed to live with her up to her final. It lasted up to 1990 then, when the Bilderbergs ousted her, thinking she was uncontrollable and too hostile to Europe, to replace her by the 'hollow man' John Major - her best heir would definitively be new labourer Tony Blair - another witch. It was a modern putsch proudly devised but prudently silenced by western mainstream media, warning us -and the politicians -about what they could do and not do. What they could do was becoming European commissar (Brittan, Mandelson, Sutherland), filling their wallets and emptying national assets, pillaging our resources and deliver them to the 300 global oligarchs running big enterprises and banks; what they could not do was giving the impression that they are interfering with the New World Order. Like all the useful idiots and small criminals, the too authoritarian Margaret Thatcher fell for the good she had inside her: she still liked too much her country and its independence. But these kinds of goods are just a souvenir in our world.

Thatcher has too coincided with Reagan in the so-called awakening of the west and great Anglo-Saxon powers, a remix of Wilson and Lloyd George, or Roosevelt and Churchill. This coincidence was good for her image, even if finally the fall of the evil empire was linked essentially to the personal and criminal incapacity of Gorbachev more than to the genius or achievements of the West. But Thatcher had at least an obsession: the neo-liberal agenda. It looked like a new religion of the reactivated market, with gurus and mantras, even if it has accelerated the decline of Europe and America (I don't write the west, because the West is now everywhere). As wrote on witchcraft in a famous book famous British historian Trevor-Roper:

It was a new explosive force, constantly and fearfully expanding with the passage

Thatcher's balance was by no mean a good one: she could not control deficits, southern immigration (despite the fact she approved once the courageous stand of Enoch Powell), neither she could diminish unemployment and industrial decline (in fact she accelerated it, maybe purposely). Thatcher synthesized like Sarkozy or Merkel later what a conservative fearful greedy petit-bourgeois can offer of worst to our eyes: she adored American military power; she demonized labour and syndicates; she dreamt of money and order in her shop. This is why she hated the most prestigious working class in the world; she systematically and carefully destroyed this working class and old English industrial power.

As I observed once in the magazine European, England has always been a country of avant-garde. Science, parliamentary, democracy, individualism, industry, football, rock and roll, journalism, modern banking, and post industrialism too, everything was invented in England. Even the medieval revolution I would be so fond of!

Thus Thatcher was a wicked witch, and an efficient one, in the right country. She was the right witch at the right place. Everyone knows the iron lady of Tass Agency, everybody now remembers her; for she has won a spiritual battle. Trevor-Jones, again:

Such were the human witches, the fifth column of Satan on earth, his front-line agents in the struggle for control of the spiritual world.