Russia takes care of the Russian language in Ukraine

"Pravda.Ru" met with the Russian Ambassador to Ukraine Mikhail Zurabov at the representative office of the agency Rossotrudnichestvo (Russian Cooperation) in Kiev, where the project "Total Dictation," an annual Russian educational campaign designed to draw attention to the issues of literacy, was implemented. A voluntary dictation test for the public takes place simultaneously in 35 countries, including Ukraine. 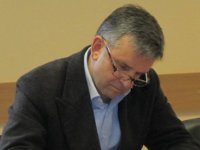 Approximately a hundred people took part in the exercise. Zurabov also came to test his literacy and sat next to the deputy of the Verkhovna Rada of Ukraine Vadym Kolesnichenko. In addition, Total Dictation event was held in the central district of the Ukrainian capital in the Library named after Kostomarov.

When the dictation was over, Zurabov told reporters that he hoped for a good grade, though not the highest. "I believe that I write pretty well," the diplomat said, adding that teachers in the Leningrad school where he studied were very good, and the Russian language was taught at a high level.

He also noted that the propaganda of the Russian language in forms such as "Total dictation" is very welcome because it "is a very useful, relevant and timely event." What is the purpose of such propaganda?

According to Zurabov, Russia in recent years has developed quite rapidly, but at the same time one cannot help noticing the "obvious shortage of labor" in the country. Up to about 2025 Russia will face the problem of reduction of the population of working age, therefore the issue of attracting migrants to the Russian Federation is now key. The ambassador stressed that migrants must meet certain requirements, including the requirement of knowledge of the Russian language.

I should point out a number of public, non-governmental organizations that had significant success. For example, there is quite a respectable organization "Russian World" that in recent years has managed to increase its presence, mainly due to the fact that they issued a number of manuals and textbooks for schools and day care facilities.

Last year, there were dozens of schools in Ukraine covered by these programs. In the Russian-speaking regions of the country, Kharkiv, Donetsk region in the south of Ukraine, a high percentage of schools have this program, and it is certainly a positive trend.

The second direction of the program is issues of retraining teachers. This is an extremely important aspect, because even if we are now able to promote the study of the Russian language with the support of a relevant ministry of Ukraine, we will face a banal problem - the lack of teachers."

"They are hardly trained in Ukraine now."

"Today, under the framework of regional cooperation, especially border areas, this kind of work has been established, albeit not completely. The third area is distance learning. Here too there is some progress.

In any event, a number of schools in Ukraine are now equipped with the means to access remote information sources funded by Russian sponsors. I am aware that colleagues from "Gazprom" intend to more closely involve Ukraine in the distance learning program, including those fors the Russian language."

"Why is "Gazprom" doing this?"

"The company believes that, if in respect of regions of the Russian Federation the program "Sports to Children" is its priority, in the CIS countries where "Gazprom" has presence they need to support the Russian language and it is one of the most important humanitarian tasks.
And finally, this is opening of Russian schools that will operate either at the Embassy or at Rossotrudnichestvo. Now we already have one such school, but I am sure that before the end of the year or maybe early next year, we will see two such schools and a kindergarten in Sevastopol.

Sevastopol is understandable since there is a large number of families of servicemen of the Russian Black Sea Fleet with school-age children, and parents want their children to receive education under Russian programs.

"That is, some efforts have been made."

"The key issue is the issue of building such interaction with the Ukrainian education system that would provide an opportunity for young people, if necessary, to obtain a high school diploma consistent with both Ukrainian and Russian standards. This would provide the opportunity for young people in the future to continue their education in the Russian Federation.
These are four major areas of work in support of the Russian language. I agree with you that we are still in the beginning, but would not agree that this issue has been ignored."