Reporters Without Borders do not see any borders anywhere

Seven years ago, an international human rights organization "Reporters without Borders" started a list of "enemies of the Internet". This year's report identifies five "enemy countries": Bahrain, Vietnam, Iran, China and Syria. It also lists five European organizations that help the authorities to control the web. The observers were surprised with the disappearance of Uzbekistan from the blacklist.

Founded in 1985 in Paris, the non-governmental organization was called Reporters sans frontières (RSF). Its organizers named it with a reference to the already reputable organization Médicines Sans Frontières - "Doctors without Borders". It is believed that on the basis of paragraph 19 of the Universal Declaration of Human Rights, "Reporters without Borders" act in favor of press freedom and against censorship.

The lists of "Reporters without borders" are striking in terms of their political bias and lack of any scientific criteria. The new rating dedicated to monitoring and surveillance of Internet users published on March 12 is no exception. The authorities of Bahrain, Vietnam, Iran, China and Syria introduce censorship of cyberspace, hacking accounts of journalists and bloggers, with assistance of technology providers and programs, such as the British-German Gamma International, German Trovicor, Italian Hacking Team, French Amesys, and American Blue Coat. 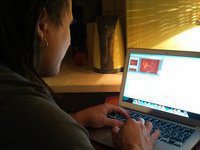 Russia has repeatedly appeared on the lists of "Reporters without Borders," last time in 2010-2012. This year's report did not list Russia directly as an "enemy of the Internet", but activists of this organization reminded in their statements that in November of 2012 the Russian Federation introduced a new law on censorship on the Internet. According to the estimates of the "Reporters," 600 websites were shut down in Russia for containing child pornography.

In an interview with Deutsche Welle, head of the German branch of "Reporters without Borders" (Reporter ohne Grenzen) Christian Mihr said that the fact that Russia and Belarus were not explicitly named did not mean that the five countries listed in the report were the only Internet enemies. On the contrary, in term of media freedom and freedom of the Internet, the situation in Russia and Belarus, according to "Reporters without Borders", caused a major concern. They, too, can be called enemies of the Internet. He added that this year the organization wanted to focus on certain telling incidents in the countries that had not been mentioned before and companies that offer technology and software for web tracking.

According to "Reporters without Borders," Russia and Belarus still remain, though not explicitly named, "enemies," while nothing was said about Uzbekistan. This is despite the fact that in the Internet space of this Central Asian country such sources as Ozodlik (RFE / RL Uzbek), Bi-Bi-Cu and Fergana.ru, Wikipedia and the magazine "Market Leader" are still banned. Uzbek President Karimov said that democracy, like homosexuality, was alien to the people of Uzbekistan. Time will tell what the West expects from the Uzbek government.

Volker Bräutigam was the editor of the North German Radio (NDR) ten years ago. In addition, for the past ten years, he worked as an editor at the central office of the first television channel in Hamburg Germany ARD-Tagesschau. Now he is retired, but writes regularly for the Ossietzky magazine. He said directly that the "black list" of "Reporters without Borders" was copied from the respective document of the U.S. State Department.

It is for this reason that the list of "enemies" always includes Iran, Syria, North Korea, Vietnam, China, and Cuba, but the "Reporters without Borders" avoid any mention of the actions against journalists in the United States or U.S. friendly countries. A few years ago, the organization ignored the murder of media professionals in the Philippines, although in terms of the number of journalists killed the country was in the second place in the world.

In March of 2006, the German Evangelical Press Service Evangelische Pressedienst (epd), referring to the German branch of "Reporters without Borders," reported the arrest of 26 journalists in Belarus. This information was reprinted by numerous other publications and broadcast on the radio. This information was used to talk about the lack of freedom for journalists in Belarus, and the inhumanity of the alleged "authoritarian" (just at the time when he was re-elected by three quarters of the population) president Lukashenko.

In fact, some of the 26 detained "journalists" were not media representatives, and some of these people were not Belarusians. Nine of them were released almost immediately, but this was not reported by "Reporters without Borders". The "Reporters" had to unwillingly admit that Canadian Frederick Lavoie was not even officially accredited as a journalist. His other "colleagues" (some of them are Ukrainians) had no IDs. "Reporters without Borders" did not bother to ask whether the detention was against the applicable law or conducted in accordance with the local legislation.