A well-known author, who dedicated his work to the events of September 11, Phillip Marshall, was killed. His two children and even his dog were killed too. The first version said that the man killed his children and then himself. However, the Americans have strong doubts about this version. Recently, quite a number of strange murders have taken place in the U.S. 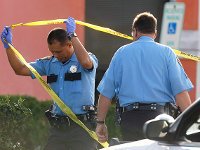 The bodies of Phillip Marshall, his two children and the dog were found only on the fourth day after the murder. This is very strange, given the fact that the man lived in a small elite town, predominantly with white population, where everyone knew each other well.

All victims were shot from the same gun, which was discovered on the crime scene. The finding allowed the police to put forward the version of the double murder, followed by suicide.

Phillip Marshall was well known in the States. He was a retired captain, a former helicopter pilot and a military veteran. He became known for a series of books, in which he set out the versions of the 9/11 terrorist attacks. Marshall's versions differed greatly from the official one.

According to Marshall, there was a secret deal between government officials and Saudi Arabian aristocracy to tighten the screws in the U.S. and fabricate a pretext for foreign military operations by American troops.

Recently, Marshall had been working on his fourth book. He promised that the book would be a bombshell. He also said that publishing the book, he signed his own death warrant.

It seems unlikely that the writer was serious when making such statements. It more looks like the promotion of a new book, which was the fourth one in a row under his authorship. The subject was thus a bit moth-eaten.

There are many other strange things in this murder... Let's not forget that Marshall was closely linked to intelligence agencies. They know how to fix it all quietly.

It is an open secret that dead bodies "sell best" under the conditions of modern mass culture. After this terrible incident, there is no doubt left that Marshall's fourth book, if published, will receive huge circulation. But if the author described a close version of events in his books, why would secret services make such an advertising campaign to his work by killing the writer?

This means that the book will be published with necessary editing. It can also be possible that Marshall's version of 9/11 events was good to high-ranking organizers of the WTC attacks. Possibly, the sources and curators of Phillip  Marshall need the controversy about this book, and his mission was considered to be fulfilled ...

Continuing the theme of the mythical al-Qaeda, one can remember the "special operation" to destroy terrorist No.1, Osama bin Laden. The whole world was giggling about that.

The Americans have not provided one single proof of Osama's death. They only released a photo of the man, who looked like Osama, in which experts easily found traces of montage. "The analysis showed that the picture was obviously a montage. They put the beard and the lower part of the face from Bin Laden's old photographs to the disfigured face," said Mladen Antonov, editor in chief of AFP's photo department.

The participants of the operation, in which US SEALs allegedly killed Bin Laden, were killed afterwards too. A couple of months after the elimination of Bin Laden, on August 8, 2011, the helicopter that for some reason had all the participants of the operation on board, was downed. The crash killed 38 people, with 22 SEALs among them. Such one-time loss of the U.S. Army in Afghanistan have never occurred either before or after.